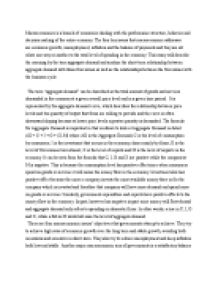 ﻿Macroeconomics is a branch of economics dealing with the performance structure, behavior and decision-making of the entire economy. The four key issues that macroeconomic addresses are economic growth, unemployment, inflation and the balance of payments and they are all relate one way or another to the total level of spending in the economy. This essay will describe the meaning by the term aggregate demand and analyze the short-term relationship between aggregate demand with those four issues as well as the relationships between the four issues with the business cycle. The term ?aggregate demand? can be described as the total amount of goods and services demanded in the economy at a given overall price level and in a given time period. It is represented by the aggregate-demand curve, which describes the relationship between price levels and the quantity of output that firms are willing to provide and the curve is often downward sloping because at lower price levels a greater quantity is demanded. The formula for Aggregate Demand is important in that is allows to look at Aggregate Demand in detail: AD = C + I + G + (X-M) where AD is the Aggregate Demand; C is the level of consumption by consumers; I is the investment that occurs in the economy, done mainly by firms; G is the level of Government investment; X is the level of exports and M is the level of imports in the economy. ...read more.

Because the increase in the demand for output will lead to the demand for labour at each wage rate will grow and consequently cause an increase in total employment and therefore a reduction in unemployment. The government can attempt to influence the level of Aggregate demand through Fiscal policy and Monetary policy. If unemployment is relatively high then either interest rates can be lowered to expand demand (Monetary Policy) or, alternatively, the government could lower taxes and boost government spending (Fiscal policy). These measures will expand demand and lead to a fall in unemployment. For instance, when interest rates are low it is cheaper to borrow, which leads to higher consumer expenditure and higher investment in machines and buildings by firms. The overall increased demand helps creates jobs and helps reduce unemployment. Inflation refers to the rising in general prices levels. Money loses some of its value because its purchasing power falls. There are three main causes of inflation which are demand-pull, cost-push and money or the quantity theory of money. Demand-pull inflation is caused by continuing rises in the aggregate demand, it occurs when the growth in aggregate demand is so strong that aggregate supply cannot respond quickly enough. Cost-push inflation caused by costs rising for firms which are in turn passed on to consumers. Increases in the money supply will also lead to inflationary pressure. ...read more.

The low point of the cycle occurs next. This is known as a trough or a depression period. It is a large recession with the prices, interest rates and wages are all in their lowest, national income and expenditure decline. Therefore, unemployment tends to be at its peak and economic growth is in its low point. There may have a downward pressure on prices and leads to deflation. Low interest rates will also result in a lower exchange rate making exports become more desirable and imports less desirable because of the increased cost. This will tend to a lead to a current account surplus. The last phrase is the recovery where the economy starts emerging from recession. Business activities become more active and consumer will purchase more. Aggregate demand and prices will rise. As the results, unemployment will begin to decline and economic growth will increase but conversely inflation will start to grow and the balance of payment will again tend to fall into deficits. In conclusion, unemployment, inflation, economic growth and balance of payments have close relationships with aggregate demand as well as with each other and the success in achieving each of the objectives fluctuate with the course of the business cycle in the short-run. Therefore it is required governments to take into consideration carefully when making any decision in order to achieve or control any of these macroeconomic objectives. ...read more.