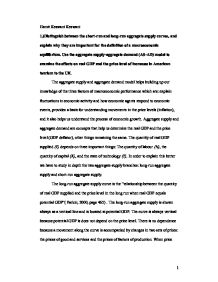 Use the aggregate supply-aggregate demand (AS-AD) model to examine the effects on real GDP and the price level of increases in American tourism to the UK.

In the long run, real GDP equals potential GDP and there is full employment. This curve is vertical and it only changes when potential GDP changes. In the short run, real GDP deviates from potential GDP. Shot -run aggregate supply is the relationship between the quantity of real GDP supplied and the price level when wage rates and other factor prices are constant. Change in potential GDP changes both long-run and short-run aggregate supply. We have also studied the aggregate demand curve. The aggregate demand curve slopes downward because the higher the price level, the smaller the quantity of real GDP demanded. We have also seen how the AD and AS curves are important for macroeconomic equilibrium. In a long-run macroeconomic equilibrium, real GDP equals potential GDP and aggregate demand determines the price level. In a short-run macroeconomic equilibrium, real GDP and the price level are determined simultaneously. After we saw with the AS -AD model the effects of real GDP and the price levels. BOOK Michael Parkin, Melanie Powell, Kent Matthews. Economics. UK: Pearson Education Limited 2003, (c) 2000. David Begg, Stanley Fischer, Rudiger Dornbusch, Economics.UK: McGraw-Hill Online Learning Centre, (c) 2002. WEBSITE Aggregate Supply http://www.revisionguru.co.uk/economics/aggsupply1.htm. (12/03/2005) Business.com http://www.business.com (13/03/2005) ?? ?? ?? ?? 1 ...read more.

This essay responds well to the question, looking at the difference between the short-run and long-run curves. I wasn't too sure about the definition of the aggregate demand curve, and would advise talking about the components (Government Spending, Investment, Consumption, ...

This essay responds well to the question, looking at the difference between the short-run and long-run curves. I wasn't too sure about the definition of the aggregate demand curve, and would advise talking about the components (Government Spending, Investment, Consumption, Exports minus Imports). The explanation given in this essay isn't the common one examiners are looking for, so I would be wary. I would've liked to have seen a Keynesian long-run supply curve, as this would've gone further in incorporating both short-run and long-run curves as shown in this essay.

The analysis here is strong. There is a good awareness of why the long-run supply curve is perfectly inelastic, and this is something examiners will be looking for. Being able to explain concepts rather than simply assert them will always gain credit. The factors affecting aggregate supply are outlined well, but I would've liked to have seen more elaboration. For example a discussion of why productivity through innovation will shift the curve right. This would show the examiner that you have a full understanding of the concept. The diagrammatical analysis here is good, and shows a variety of skills. I would advise a simple sentence such as "An increase in innovation will cause AS to shift right to AS1, causing macroeconomic equilibrium to change, with real GDP increasing from Y to Y1 and price level down from P to P1." These sentences will always gain credit and solidify your knowledge.

The quality of writing here is good. The style is fluent, and the citing makes for a convincing argument. I would note that it's not necessary to reference at A-Level, but it is good practice for university and beyond. Spelling, punctuation and grammar are good, but sometimes the syntax is wrong. For example "After we saw with the AS Ã¢â‚¬â€œAD model the effects of real GDP and the price levels." there needs to be some rewording here as it's not clear what they are saying. Similarly, I'm not keen on the use of "we" and "I" in essays as it seems to lack sophistication.