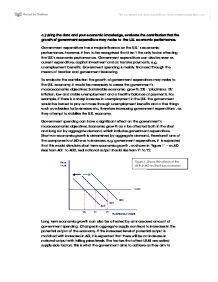 Using the data and your economic knowledge, evaluate the contribution that the growth of government expenditure may make to the U.K. economic performance.

Currently the U.K. economy is facing a recession - 6.3% unemployed, and the government has aimed to intervene by introducing several schemes, such as: subsidising businesses - e.g. the motor car industry, promoting and helping set up job centres, they are also helping to delay mortgage payments, due to the fact many people cannot afford to pay their mortgages at this moment in time due to the economic depression. Therefore, the government are able to use their spending on helping to improve on the levels of employment through a difficult period. The government can also use Fiscal Policy to influence macroeconomic variables and achieve their macroeconomic objectives. Fiscal Policy is dependent on the changes in the level and composition of both taxation and government spending, which can impact on many variables in the U.K. economy, such as: Aggregate Demand ( C+I+G+(X-M) ), resource allocation and the distribution of income. They can also introduce automatic stabilisers which aim to reduce fluctuations in economic activity. For example if unemployment rises, i.e. during a recession, tax revenue generated will therefore fall due to the loss of workers. In response to this the government may be forced to increase the level of Job Seekers Allowance. Increasing tax revenue can also be useful to reduce the amount of national debt in the U.K. ...read more.

With low interest rates, more people are likely to attempt to borrow money from the banks and consume more. However, at the moment, this is another issue due to the fact banks are very reluctant to lend to each other. Another factor that affects the U.K. economic performance is exchange rates. For example if the sterling to dollar exchange rate is �1 = $2, however the sterling begins to depreciate due to the lack of consumer confidence to �1 = $1.50, exports out of the U.K. will be cheaper for other countries, therefore we begin to lose money to the weaker pound. Not only this but it will also be more expensive to import goods from abroad, therefore there will be a decrease in AD, directly affecting the U.K.'s economic performance. In conclusion, the growth of government expenditure does have a major implication on the U.K.'s economic performance; however, it isn't the only factor that affects the country's economy e.g. consumer confidence in AD. Judging by the government's macroeconomic objectives, it is fair to say if there is a change in government expenditure it can have a significant effect on their objectives i.e. short and long run economic growth. However, as stated, consumer confidence is the major component of AD and even if there is a significant rise in government spending and intervention, it does not necessarily result in a more efficient economy, as seen currently in the global economic depression. ...read more.