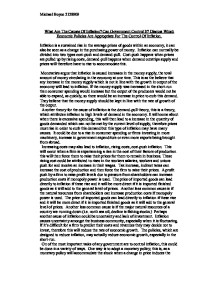 What Are The Causes Of Inflation? Can Government Control It? Discuss Which Economic Policies Are Appropriate For The Control Of Inflation.

What Are The Causes Of Inflation? Can Government Control It? Discuss Which Economic Policies Are Appropriate For The Control Of Inflation. Inflation is a sustained rise in the average prices of goods within an economy, it can also be seen as a change in the purchasing power of money. Inflation can normally be divided into two types cost-push and demand-pull. Cost-push happens when prices are pulled up by rising costs, demand-pull happens when demand outstrips supply and prices will therefore have to rise to accommodate this. Monetarists argue that inflation is caused increases in the money supply, the total amount of money circulating in the economy at one time. This is as the believe that any increase in the money supply which is not in line with the growth in output of the economy will lead to inflation. If the money supply was increased in the short-run then consumer spending would increase but the output of the producers would not be able to expand, as quickly, so there would be an increase in price to curb this demand. ...read more.

Another lees common cause is if the natural resources from shareholders can increase production costs if monopoly power is used. The price of imported goods can lead directly to inflation if these rise and it will be more direct if it is imported finished goods as it will add to the general level of prices. Another less common cause is if the major natural resources of a country are running down (i.e. north sea oil, decline is fishing stocks.) Perhaps another cause of inflation could be uncertainty and lack of investment. Inflation causes uncertainty amongst the business community, especially when it is fluctuating. If it's difficult for a firm to predict their costs and revenues they may decide not to invest, therefore this will reduce the rate of economic growth. The policies, which are designed to reduce inflation, may actually reduce economic growth, especially in the short-run. On of the most important tasks of any government are to control inflation, this could be done in a variety of ways. ...read more.

Supply side policies, these are policies, which enable the producers to operate effectively. Increase in competition and reward for hard work and innovation Reducing income or corporation tax to encourage entrepreurs and employees to be more efficient by allowing them to keep more of their income or company profit. Cutting state benefit in order to encourage the unemployed o return to work. Privatising nationalised industries to open them up to competition from other businesses. Supporting firms that provide training to create a more efficient workforce Control of trade unions as they may prevent wages from being flexible Removal of restrictions to employment such as maximum number of working hours per week Reducing the national insurance contributions of employers in order to reduce the cost of taking on new employees Exchange rate policy, this policy will affect the costs of imports and exports so therefore will have a knock on effect on inflation. Income policy is the process of imposing limits on pay and price increases maybe a pay freeze on public sector workers pay. ?? ?? ?? ?? Michael Boyce 2128909 ...read more.