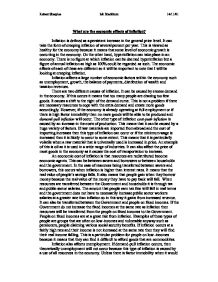 What are the economic effects of inflation?

What are the economic effects of inflation? Inflation is defined as a persistent increase in the general price level. It can take the form of creeping inflation of several percent per year. This is viewed as healthy for the economy because it means that some level of economic growth is occurring in the economy. On the other hand, hyperinflation can take place in an economy. There is no figure at which inflation can be deemed hyperinflation but a figure of annual inflation as high as 100% could be regarded as such. The economic effects of each of these are different so it will be important to note that I will be looking at creeping inflation. Inflation affects a large number of economic factors within the economy such as unemployment, growth, the balance of payments, distribution of wealth and taxation revenues. There are two different causes of inflation. It can be caused by excess demand in the economy. If this occurs it means that too many people are chasing too few goods. ...read more.

The amount that people earn tax free will fall in real terms and the government does not have to necessarily increase public sector workers salaries at a greater rate than inflation so in this way it gains from increased revenue. It can also be transferred between the Government and people on fixed incomes. If the Government do not increase the fixed incomes at the same rate as inflation then resources will be transferred from the people on fixed incomes to the Government. People on fixed incomes are at a great risk from inflation. Examples of these types of people are groups that are often on low-incomes and vulnerable anyway such as pensioners, people claiming various social security benefits. If inflation occurs at a fairly high rate and their income is not increased at the same rate then they will find their real income falling. This is a particular problem for people on low-incomes because it means that they can find it difficult to afford goods that are commoditites. ...read more.

Two problems that do arise as a result of inflation and cause inflation to continue are the wage-wage spiral and the wage-price spiral. The wage-wage spiral is a spiral that exists because if one set of workers witness another group experiencing wage increases then they themselves will want their own wages to be increased. Similarly, the wage-price spiral is a problem that is caused by the fact that increased wages cause the price of the good to increase because it is a factor of production. The problem with these is that they are caused by inflation and peoples' desire for their wages to keep up with inflation yet they cause more inflation to take place as they cause the price of goods to increase further. Overall the economic effects of inflation affect a lot of different factors but have a differing effect on them. Some groups gain from it whereas others are affected badly. Borrowers, people with mortgages and the Government can benefit from inflation whereas lenders, people on fixed incomes and exporting industries are hit badly by inflation. ?? ?? ?? ?? Robert Sharples Mr Blackburn 14/11/01 ...read more.