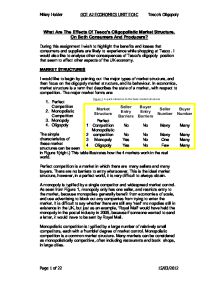 What Are The Effects Of Tescos Oligopolistic Market Structure, On Both Consumers And Producers?

What Are The Effects Of Tesco's Oligopolistic Market Structure, On Both Consumers And Producers? During this assignment I wish to highlight the benefits and losses that consumers and suppliers are likely to experience while shopping at Tesco. I would also like to analyse other consequences of Tesco's oligopoly position that seem to affect other aspects of the UK economy. MARKET STRUCTURES I would like to begin by pointing out the major types of market structure, and then focus on the oligopoly market structure, and its behaviour. In economics, market structure is a term that describes the state of a market, with respect to competition. The major market forms are: 1. Perfect Competition Market Structure Seller Entry Barriers Buyer Entry Barriers Seller Number Buyer Number 1 Perfect Competition No No Many Many 2 Monopolistic competition No No Many Many 3 Monopoly Yes No One Many 4 Oligopoly Yes No Few Many 2. Monopolistic Competition 3. Monopoly 4. Oligopoly The simple characteristics of these market structures can be seen in Figure 1(right.) This table illustrates how the 4 markets work in the real world. Perfect competition is a market in which there are many sellers and many buyers. There are no barriers to entry whatsoever. This is the ideal market structure, however, in a perfect world, it is very difficult to always obtain. A monopoly is typified by a single competitor and widespread market control. As seen from Figure 1, monopoly only has one seller, and restricts entry to the market, because monopolies generally benefit from economies of scale, and use advertising to block out any companies from trying to enter the market. It is difficult to say whether there are still any 'real' monopolies still in existence in the UK, but just as an example, 'Royal Mail' would have held the monopoly in the postal industry in 2005, because if someone wanted to send a letter, it would have to be sent by Royal Mail. ...read more.

There are three reasons why this may have happened: Tesco's use of its own-brand products, including the upmarket 'Finest' and low price 'value' ranges. The company has taken the lead in overcoming customer reluctance to purchasing own brands, which are generally considered to be more profitable for a supermarket as it retains a higher portion of the overall profit than it does for branded products. Appealing to customers of all income ranges is also a main reason to the leap in growth. An 'inclusive offer' is a phrased used by Tesco to describe its aspiration to appeal to all customers of all income range, in the same stores. According David McCarthy, a retail analyst, Tesco have 'pulled off a trick that no other retailer has achieved; that is, of course, appealing to all segments of the market.' In contrast, ASDA's marketing strategy is heavily focused on value for money, which can undermine its appeal to upmarket customers even though it sells a wide range of upmarket products. By taking on this marketing strategy, ASDA have seemingly lost interest from upmarket customers, that Tesco benefit from, as well as the customers looking for good value. The third point is simply, economies of scale. Economies of scale characterize a production process in which an increase in the scale of the firm causes a decrease in the long run average cost of each unit. Economies of scale can be enjoyed by any size firm expanding its scale of operation. The common ones are purchasing (bulk buying of materials through long-term contracts), managerial (increasing the specialization of managers), financial (obtaining lower-interest charges when borrowing from banks and having access to a greater range of financial instruments), and marketing (spreading the cost of advertising over a greater range of output in media markets). Each of these factors reduces the long run average costs of production. During its long term dominance of the supermarket sector, Sainsbury's retained an image as a high-priced middle class supermarket which considered itself to have ...read more.

Some technical proposals from the commission that could have far-reaching consequences, are expected to rectify this problem, and it is likely that supermarket groups will be prohibited from buying land near to an existing store and then sitting on the land with intent of preventing a competitor from muscling in. Supermarket groups may be forced to sell off those chunks of their so-called land banks that are competition-spoilers. It is also likely that there'll be a ban on the groups' use of restrictive covenants whose point is to prevent any parcel of land being developed by a competitor. As the biggest holder of land, Tesco is bound to be seen as the most at risk here. Looking back at Tesco's success, there are 3 main points that can be evaluated upon: 1. Tesco's use of its own brand products 2. The inclusive offer, Tesco's aspiration to appeal to upper, medium and low income customers in the same stores. 3. Customer focus, to create value for customers to earn their lifetime loyalty. Although Tesco has been criticised for acquiring too much of the market, by forms of 'hostile' behaviour, and causing companies to be forced to close, it is easy to clearly see the benefits that consumers are benefiting from Tesco's oligopoly. To state the obvious, when suppliers provide supermarkets with more items at a cheaper price, that is in theory good news for shoppers, and they are also offering good in-store service, and a comfortable shopping environment. From the gathered data, I feel that the features of the original hypothesis have been suitably proved; however, it still remains unclear whether the future looks good for consumers and suppliers that deal with Tesco. Will Tesco start taking advantage of their power in the market, to drive other competitors out, and start forming the Tesco monopoly, at which point it will drive prices up, and consumers will have no power to change anything? BILIOGRAPHY Books used: * Business Economics * P.Maunder * 1989 * Applied Economics * A.Griffiths & S.Wall * 2004 * Economic Growth * R. ...read more.