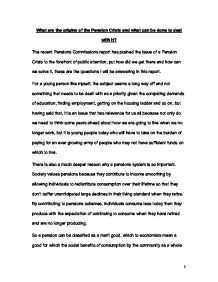 What are the origins of the Pension Crisis and what can be done to deal with it?

What are the origins of the Pension Crisis and what can be done to deal with it? The recent Pensions Commissions report has pushed the issue of a Pension Crisis to the forefront of public attention, put how did we get there and how can we solve it, these are the questions I will be answering in this report. For a young person like myself, the subject seems a long way off and not something that needs to be dealt with as a priority given the competing demands of education, finding employment, getting on the housing ladder and so on, but having said that, it is an issue that has relevance for us all because not only do we need to think some years ahead about how we are going to live when we no longer work, but it is young people today who will have to take on the burden of paying for an ever growing army of people who may not have sufficient funds on which to live. There is also a much deeper reason why a pensions system is so important. Society values pensions because they contribute to income smoothing by allowing individuals to redistribute consumption over their lifetime so that they don't suffer unanticipated large declines in their living standard when they retire. By contributing to pensions schemes, individuals consume less today than they produce with the expectation of continuing to consume when they have retired and are no longer producing. So a pension can be classified as a merit good, which to economists mean a good for which the social benefits of consumption by the community as a whole exceed the private benefits received by the consumer. In other words consumption of a merit good by an individual produces positive externalities that benefit the wider community. Sometimes individuals don't act in their own best interests because they only consider short-term utility maximisation and not long-term utility maximisation. ...read more.

Almost all private pension schemes have a tax relief on their contribution. With a basic rate of income tax of 22%, every �100 that goes into the pension costs the individual �78 (based on the tax year 2004/05). If the individual pays income tax at the higher rate of 40%, every �100 that goes into their pension costs �60 (based on the tax year 2004/05- A guide to your pension options; The Pension Service, p13). For the tax year 2004/05, a member of a contracted-out occupational scheme earning between �4,108 and �26,00 will get a State Second Pension top-up. A person contributing. A person contributing to a contracted-out personal pension or stakeholder pension earning between �4,108 and �11,600 in the tax year 2004/05 will also get a State Second Pension top-up for that year. The top-up reflects the more generous additional pension provided by the State Second Pension. There is an opportunity cost to government spending on saving top-ups and some commentators might point out that the money would be better spent on public services such as healthcare and education (get current gov expenditure figures). In a positive light, such schemes are very tax efficient for the contributor, however, this benefit is not widely known or understood and thus this is more evidence that poor consumer knowledge in the pension industry is one of the reasons behind the current pension problem. So Who is involved in What. According to the Pension Institute's estimates, 64% of employee are accruing funded pensions, 42% occupational and 22% personal (see Table 1), but coverage of occupational pensions is declining, generally reflecting declines in such coverage in the private sector. Meanwhile overall coverage of the self-employed is lower at 41% giving a total coverage rate of an estimated 61.1%. Source: Government Actuary (2003), PP1 (2003), Department of Employment. Note that there were 27.2m in 2000 of whom 3.1m were self-employed and 24m in "employees in employment". ...read more.

Companies should be encouraged with incentives to offer final salary defined benefits schemes and the government should protect promises to pay by laws so that individuals will be certain of what to expect when they retire and will therefore be more confident to participate. Although stakeholder pensions are cheap and flexible they have not been sold hard enough in the UK and the reality is that individuals will face poverty in their old age unless they save has not been communicated to the public well enough, government should alert people of the need to save more and local authorities should be encouraged to get the message across. It could increase the state pension to a reasonable level, so that people could choose either to live in it or save in order to supplement it. It could carry on with means testing but make some retirement saving compulsory. Either of those would be unpopular because the first would jack up taxes and the second would have much the same effect. So a balance needs to be struck between raising the tax burden and raising the contribution and saving levels and workforce in the population. To most people especially the younger generation, pensions schemes are too complex and there is a lack of trust in the industry. Getting advice from a financial adviser can be costly. Perhaps local authority officers should offer a free service educating the younger generation about the importance of saving and how best to go about it. Financial intelligence is what the government should be encouraging so that individuals are confident that they are saving and investing their money in the most efficient way possible. Demographic changes present a real concern and needs to be taken seriously but by gradually increasing the retirement age and pursing the right balance of command and control, market based incentives and public information and incentives, combined with some supply side policies, it is not unreasonable to suggest that the pensions demographics time bomb can be defused. 1 ...read more.