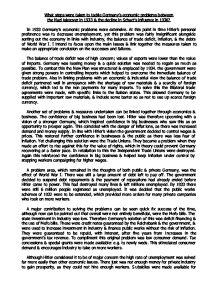 What steps were taken to tackle Germany's economic problems between the Nazi takeover in 1933 &amp; the decline in Schat's influence in 1936

What steps were taken to tackle Germany's economic problems between the Nazi takeover in 1933 & the decline in Schact's influence in 1936? In 1933 Germany's economic problems were extensive. At this point in time Hitler's personal preference was to decrease unemployment, yet this problem was fairly insignificant alongside sorting out the economy in links with industry, the balance of trade deficit, inflation, & the debts of World War I. I intend to focus upon the main issues & link together the measures taken to make an appropriate conclusion on the successes and failures. The balance of trade deficit was of high concern; values of exports were lower than the value of imports. Germany was loosing money & a quick solution was needed to regain as much as possible. To combat this the New Plan was structured & emplaced by 1934. the government were given strong powers in controlling imports which helped to overcome the immediate balance of trade problem. ...read more.

A problem area, which remained in the thoughts of both public & private Germany, was the effect of World War I. There was still a large amount of debt left to pay off. The government decided to suspend debt repayments & the payment of reparations had already ended before Hitler came to power. This had destroyed many lives & left millions unemployed. By 1933 there were still 6 million people registered as unemployed. It was decided that the public works schemes of 1932 were to be extended, which provided more orders for many private companies who took on more workers. A major contribution to solving the problems can be seen quick fix success of the time, although now can be pointed out that overall were not entirely beneficial, were the Mefo bills. The state investment in industry was low. Therefore Germany's solution of this was deficit financing & the use of Mefo bills. ...read more.

The Youth Service (RAD) took men aged 19-35 off the registers for six months of compulsory labour service. This gained enthusiasm & could allow men to become interested in trades. Jews were banned from working in the public sector & were gradually forced out of many other areas of employment. This encouraged uniformity & also began to fit in with Nazi ideals. And a finial step in solution was to make some groups ineligible for unemployment relief, e.g. agricultural workers. In retaliation to Germany's economic crisis in 1933, the government in a three-year period with the help of Schact tackled problems with business, industry, unemployment, & imports & exports through solutions, which provided a quick fix answer with success but these led to further problems after 1936. I believe the government at the time was a success as it did solve its problems, gained what it needed, gave spirit to Germany, & endorsed business hopes. Although the methods of bad data handling through the unemployment section can be seen as an undermining effect on their achievement, it still brought enthusiasm on a united public and private front. ...read more.