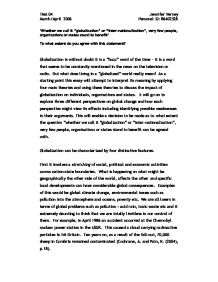 'Whether we call it &quot;globalization&quot; or &quot;inter-nationalization&quot;, very few people, organizations or states stand to benefit' To what extent do you agree with this statement?

'Whether we call it "globalization" or "inter-nationalization", very few people, organizations or states stand to benefit' To what extent do you agree with this statement? Globalization is without doubt it is a "buzz" word of the time - it is a word that seems to be constantly mentioned in the news on the television or radio. But what does living in a "globalized" world really mean? As a starting point this essay will attempt to interpret its meaning by applying four main theories and using these theories to discuss the impact of globalization on individuals, organisations and states. It will go on to explore three different perspectives on global change and how each perspective might view its effects including identifying possible weaknesses in their arguments. This will enable a decision to be made as to what extent the question "whether we call it "globalization" or "inter-nationalization", very few people, organisations or states stand to benefit can be agreed with. Globalization can be characterized by four distinctive features. First it involves a stretching of social, political and economic activities across nation-state boundaries. What is happening on what might be geographically the other side of the world, affects the other and specific local developments can have considerable global consequences. Examples of this would be global climate change, environmental issues such as pollution into the atmosphere and oceans, poverty etc. ...read more.

There is no doubt that many developing countries have increased their share of world trade as a result of globalization although this may be at the detriment of the poorer countries. There are three positions which all have a different perspective on the term globalization; these are the globalist, inter-nationalist and transformationalist and all three have strengths and weaknesses to their arguments. Globalists on the whole see Globalisation as something that is real and is happening - that changes are happening socially and economically and that it is an inevitable, irreversible development that should not be resisted. But globalists themselves fall into two categories - optimistic/positive globalists and pessimistic globalists. Optimistic/positive Globalists view it as a process that is beneficial. They would probably disagree with the statement that very few people, organizations or states stand to benefit because they welcome the changes that it brings such as improvement on the quality of life, raising living standards and the bringing together of societies and cultures - promoting a better understanding of each other. They acknowledge that globalisation is not all good news, that with it issues such as global environmental pollution, for example, but want citizens to take responsibility for their actions, to look for ways of minimising the damage through their own actions and through the use of new technologies. ...read more.

A strength of the transformationalist is that they see sovereignty as having to be shared among other private and public agencies. They would probably sit on the fence as to whether people, organizations or states stand to benefit from globalization. Some people do benefit, some don't. Some organisations benefit, some don't, and so on. It might depend on who you are, what you are, where you live etc. A weakness of the transformationalist would be that they are somewhat blinded by the scale of global inequalities that are developing as a result of rationalisation as they tend to have more of a "regional" focus. The word "globalization" seems to have come from no where to be almost everywhere. Globalisation is political, technological, cultural and economic, it affects everyone and its effects can be seen everywhere. There are winners and losers but with reference to the original question in the introductory paragraph personally it would have to be a disagreement with this statement. Globalization is not something that should be shirked but the challenges it presents need to be controlled because it is now part of the way we live and it's not going to go away. Metaphorically speaking it may mean a shrinking world but it is creating something that has never existed before and it is without doubt changing our world, for better or worse, no matter where or whom we happen to be. ...read more.