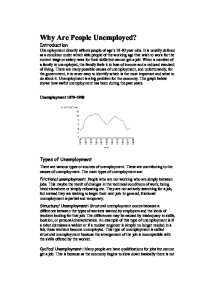 Why Are People Unemployed?

Why Are People Unemployed? Introduction Unemployment directly affects people of age's 18-60 year olds. It is usually defined as a condition under which able people of the working age that wish to work for the current wage or salary rates for their skills but cannot get a job. When a member of a family is unemployed, the family feels it in lose of income and a reduced standard of living. There are many possible causes of unemployment, and unfortunately, for the government, it is never easy to identify which is the most important and what to do about it. Unemployment is a big problem for the economy. The graph below shows how awful unemployment has been during the past years. Unemployment 1979-1998 Types of Unemployment There are various types or sources of unemployment. These are contributing to the causes of unemployment. The main types of unemployment are: Frictional unemployment: People who are not working who are simply between jobs. This maybe the result of changes in the technical conditions of work, being hired elsewhere or simply relocating etc. They are not actively searching for a job, but instead they are waiting to begin their next job. ...read more.

Industrial Adjustment: A path of unemployed people can occur when production may move from high wage countries to low wage countries, from old inefficient facilities to newer ones. Not Enough Jobs: When this happens in the industry it produces unemployment. Insufficient jobs maybe a result from a declining manufacturing sector, a growing service sector, changing consumption patterns, technological developments, third world competition etc. All these economic factors are element of the reason why people are unemployed. Structural Factors All of the structural factors help to contribute towards unemployment. Imbalance Between Skill Supply and Demand This causes structural unemployment. This is a type of unemployment like all the rest it cause unemployment. Education and Training Not the entire workforce are always properly trained. Very frequently, companies continuously complain that the skill levels of the work force do not meet the skill needs of the economy. When this happens, people loose their job because they do not have the necessary qualifications to perform the job. Movement Between Jobs Another type of unemployment is frictional unemployment when people switch jobs. This sort of unemployment like the rest is an outcome of unemployment. Seasonal Lay-Off This cause unemployment and happens all the time in various seasons. ...read more.

Whilst this is happening, the person is identified as unemployed. This basic procedure of people looking for a job or moving from one job to the next causes unemployment. Competition Many people are unemployed for years, or are often forced to accept work they dislike. This can cause stress, which could affect his or her health, and that job is taken away from someone who would like to do it. This causes someone else's unemployment. The deception that everyone should be trying to make money is causing over-competition. There are too many people taking jobs or business away from each other. This is causing massive unemployment, bankruptcies and poverty. Conclusion I know there are more reasons than just the simple reasons for why people are unemployed. It is much more complex than people think. It maybe voluntary or involuntary but whatever the cause it is still a problem in today's society. Unemployment affects all of us. Not only are the unemployed not working, and therefore not contributing to the economy, but they will also be claiming benefits and costing the government money. Except maybe the main people who are affected the most is themselves. The aim should be to keep unemployment as low as possible. ...read more.