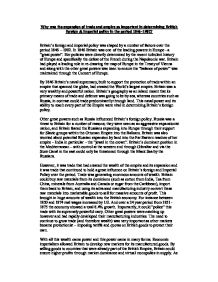 Why was the expansion of trade and empire so important in determining British foreign &amp; imperial policy in the period 1846-1902?

Why was the expansion of trade and empire so important in determining British foreign & imperial policy in the period 1846-1902? Britain's foreign and imperial policy was shaped by a number of factors over the period 1846 - 1902. In 1846 Britain was one of the leading powers in Europe - a "great power". Her policies were directly determined by the recent turbulent history of Europe and specifically the defeat of the French during the Napoleonic war. Britain had played a leading role in re-drawing the map of Europe in the Treaty of Vienna and along with the other great powers was keen to ensure the "balance of power" was maintained through the Concert of Europe. By 1846 Britain's naval supremacy, built to support the protection of trade within an empire that spanned the globe, had created the World's largest empire. Britain was a very wealthy and powerful nation. Britain's geography as an island meant that its primary means of trade and defence was going to be by sea, whereas countries such as Russia, in contrast could trade predominantly through land. This naval power and its ability to reach every part of the Empire were vital in determining Britain's foreign policy. ...read more.

With all this wealth came power and this power came in many forms. Economic imperialism allowed Britain to develop new markets for its manufactured goods. By selling goods to countries that were already part of the British Empire, Britain could ensure higher profits through market dominance and virtual monopolies in supply. As the number of territories ruled by Britain expanded, so did the market for those goods made in Britain. Britain had a policy of acquiring more countries to her empire; therefore it could further expand trade, increase profits and also develop new trade routes. As well as creating new trade routes, Britain had to protect its old ones such as India. This would be possible by increasing the strength of the British naval force on a global scale. They needed more territory to create more bases and therefore more protection for trade routes. Key parts of the British Empire included Gibraltar and the Suez Canal because they were entrance and exit points to the Mediterranean, an area where Britain not only thrived in trade, but provided the fastest route to the far eastern markets and India. ...read more.

The number of people eligible to vote had expanded thanks to the Reform Acts of 1832 and 1867 and therefore the well being of a far greater proportion of the population than just the ruling class needed to be won over in elections. One of the main goals of any government is to secure popularity with the general public. Britain was not without its problems - slums, slavery, child mortality etc. However, being part of a great power that was generating more trade therefore making them wealthier, and bringing good to the peoples of the World gave the people of Britain a greater sense of pride in their country. This patriotism was becoming ever more widespread. The electorate was delighted when news of further colonial expansion was announced. The expansion of trade and empire was vital in determining British Foreign and Imperial policy. The expansion of trade created more wealth, more industry and more goods and services. The expansion of Empire through the acquisition of new territories created new markets - and therefore more wealth again - and new "converts". Both were made safe by the continuing dominance of the Royal Navy. The expansion of both enabled Britain to use its Navy to build a strategic empire that kept the growing British electorate happy and fuelled their desire for further growth. ...read more.