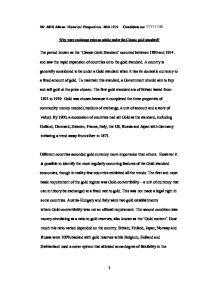 Why were exchange rates so stable under the Classic gold standard?

Mr Ali R Allana: Historical Perspectives 1800-1939 Candidate no: Y1711748 Why were exchange rates so stable under the Classic gold standard? The period known as the 'Classic Gold Standard' occurred between 1880 and 1914 and saw the rapid expansion of countries onto the gold standard. A country is generally considered to be under a Gold standard when it ties its domestic currency to a fixed amount of gold. To maintain this standard, a Government should aim to buy and sell gold at the price chosen. The first gold standard era of Britain lasted from 1821 to 1919. Gold was chosen because it completed the three properties of commodity money needed (medium of exchange, a unit of account and a store of value). By 1900, a succession of countries had set Gold as the standard, including Holland, Denmark, Sweden, France, Italy, the US, Russia and Japan with Germany initiating a trend away from silver in 1871. Different countries accorded gold currency more importance than others. However it is possible to identify the most regularly occurring features of the Gold standard economies, though in reality few countries exhibited all the trends. The first and most basic requirement of the gold regime was Gold-convertibility - a unit of currency that can in theory be exchanged at a fixed rate to gold. This was not made a legal right in some countries. Austria-Hungary and Italy were two gold establishments where Gold-convertibility was not an official requirement. The second condition was money circulating as a ratio to gold reserves, also known as the 'Gold content'. ...read more.

There is no apparent disparity in the balance adjustment for gold and silver standard countries. In spite of this, Exchange rate data clearly contrasts the fortunes of the two monetary systems. From the 1900-1914, the nominal effective exchange rate (NEER) of the countries on the silver standard ranged from 70 to 115 compared with 96 to 105 for those on the gold standard. A relevant article found that 'among Latin American currency regimes and the silver standard bloc, NEER variations often reached 50% of the respective mean.'2 Economists now perceive the whole process of adjustment not to be as coordinated and seamless under the gold regime. Besides, differences in the price of exports and imports should have been less of an issue during the gold standard. The integration of gold prices along with constant exchange rates enacted an almost global currency. As Eichengreen puts it; 'once arbitrage creates a tendency for prices to be equated across markets, the balance-of-payments adjustment process can no longer operate through Humeian relative price effects.' With evidence lacking it can be suggested that while a useful model in theory, the price-specie-flow model failed to work in reality and had little or nothing to do with exchange rate or for that matter balance of payment stability. The alternative argument is that the authority the Bank of England held over financial transactions had a stabilising influence over the global economy. Eichengreen confirms the widely held view that the Bank of England had 'the capacity to exercise leadership in the management of the international monetary system.3' Using the various policy measures at its disposal, the Bank was able to reinforce the adjustment process. ...read more.

Proficient economic performance of the central countries on the gold standard would have been insufficient for the overall smooth running of the monetary system. It was sustainable, long-term capital loans to the less outstanding countries that reduced imbalance adjustment pressures and provided an environment in which trade could blossom. I assessed three factors that could have contributed to the stable exchange rates seen under the Classic gold standard: (1) price-specie-flow mechanism, (2) A monetary system managed mainly by the Bank of England, (3) Capital loans expanded trade patterns and prevented any main countries from experiencing an economic crisis. In an overview of my findings.(1):Too simple a model to apply to real-world examples Silver standard countries experience of unstable exchange rates not working in its favour. (2):More likely - Britain was the perfect model of behaviour and this had a multiplier effect throughout the monetary system. (3): Any slowdowns in the main countries could have destabilised the whole gold standard and hence exchange rates - by in effect protecting themselves with the export of capital the main countries helped promote trade within the standard. In truth, the stability of exchange rates was probably down to a mixture of (2) and (3) with (1) acting as a useful if limited economic theory. The superb financial organisation of the Bank of England and its dominance over the monetary standard served to enhance the stability of the gold standard. Other countries could rest in the knowledge that the Bank of England was not likely to go bust any time soon. ...read more.