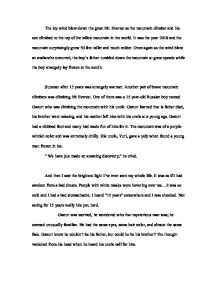 The icy wind blew down the great Mt. Everest as the mountain climber and his son climbed to the top of the tallest mountain in the world. It was the year 2018 and the mountain surprisingly grew 50 feet taller and much colder. Once again as the wind blew an avalanche occurred, the boy's father tumbled down the mountain at great speeds while the boy strangely lay frozen at the zenith. Summer after 15 years was strangely warmer. Another pair of brave mountain climbers was climbing Mt Everest. One of them was a 15-year-old Russian boy named Gazurt who was climbing the mountain with his uncle. Gazurt learned that is father died, his brother went missing, and his mother left him with his uncle at a young age. Gazurt had a clubbed foot and many had made fun of him for it. The mountain was of a purple-whitish color and was extremely chilly. His uncle, Yuri, gave a yelp when found a young man frozen in ice. ...read more.

We found his name was Vlad. The guy claims that he found something important atop the mountain. Gazurt really wished that they wouldn't climb Mt Everest again. The Vlad guy and Uncle Yuri must be crazy if they decide on climbing it. They are crazy. We are climbing it. I hardly felt better from being thawed, but there was something important I had dropped on Mt Everest. The old guy really was crazy since he agreed on climbing it. There was something about that old guy that scared me though. We were at the bottom of Mt Everest. I still had chills from my previous climb 15 years ago. The wind blew, enormous gusts of snow tumbled down the colossus. I saw something being blown down with the snow. It landed right in front of me; it was my leather-binded journal. I'd better start keeping records again. 2000 ft- the wind was stronger and far heavier. ...read more.

It was ten feet tall. It had pale white fur and harsh red eyes. Its arms were stocked up with muscle holding up colossal leather-padded paws. The creature had impressive pectorals. Its top half resembled a polar bear with goat horns and its bottom half looked like a massive mountain goat. Uncle Yuri was nowhere to be seen. The yeti swung at Gazurt while staring him dead in the face with luminous red eyes. Gazurt dove into the three-foot high snow. He was shivering, the air was so thin and he could not think. The world was spinning like crazy; it spun too much for him though. I felt drunk as I hit the snow. It didn't see me. Good, but its going for Gazurt. The boy is always getting himself into trouble! I realized that if you get too close to the beast you would faint. I remembered a giant icicle somewhere near here. I see it, its still here!! The lights switched back on, but he was still dizzy though. As he looked up, he saw Vlad and the monster fighting. ...read more.