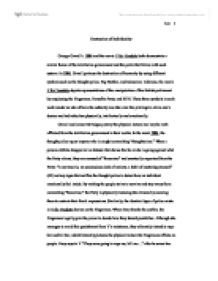 Destruction of Individuality George Orwell's 1984 and the movie V for Vendetta both demonstrate a similar theme of the totalitarian government and the perils that follow with such system. In 1984, Orwell portrays the destruction of humanity by using different symbols such as the thought police, Big Brother, and telescreen. Likewise, the movie V for Vendetta depicts representations of the manipulation of the British parliament by employing the Fingermen, Norsefire Party, and BTN. These three symbols in each work render an idea of how the authority can take over the privilege to claim one's desires and individualism physically, intellectually and emotionally. Orwell and James McTeigue portray the physical torture one may be with afflicted from the totalitarian government in their works. In the novel 1984, the thought police report anyone who is caught committing "thoughtcrime." When a person exhibits disapproval or distaste that shows that he or she is going against what the Party claims, they are accused of "facecrime" and eventually vaporized from the Party. ...read more.

Much like how the telescreen controls people's brain, BTN in V for Vendetta serves as a way of Party reaching all of its citizens in Britain and conveying its messages. BTN delivers false messages to people just as what the telescreen does. The poppet reports "Now, this is only an initial report, but at this time, it's believed that during this heroic raid, the terrorist was shot and killed"; the BTN News reports that the "terrorist" V was murdered trying to be a hero, which eventually ended his attempt to take over the BTN tower. In reality, however, V escapes and takes Evey to his place. The BTN news delivers this way in order to make the citizens believe that rebellion that goes against the government does not exist. By observing the roles of the telescreen and the BTN, one can clearly be wary of how the authority can demolish people's humanity through controlling their intellectuals. The two works illustrate emotional pain an individual goes through with myriad of restrictions that the government puts on its people. ...read more.

Gordon expresses his admiration of V to Evey as he says "You wear a mask for so long, you forget who you were beneath it." The people who are governed by the Big Brother and the Norsefire Party endure emotional torture from the totalitarian society in that they have to constrain their desires and hopes in order to keep themselves away from being tormented by the Party. Orwell and McTeigue utilize the three symbols in each of their works to clearly represent the hazards that may take over our lives in our forthcoming future. The thought police and the Fingermen display the pain people suffer physically from "facecrime" and their incapability of staying away from being mistreated. The two also warn how people can be intellectually manipulated through constant stream of propaganda. Most importantly, they describe how emotional pain of restricting to desire contributes the most in destroying humanity. Through witnessing the dangers that the characters confront in these works, it is crucial for every individual to question what he or she may misconceive and strive to not keep the "boot stamping on the human face." ?? ?? ?? ?? 1 Lee ...read more.