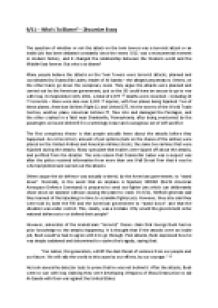 9/11 - Who's to blame? Summarising the conspiracy theories.

﻿9/11 ? Who?s To Blame? ? Discursive Essay The question of whether or not the attack on the twin towers was a terrorist attack or an inside job has been debated constantly since the event. 9/11 was a monumental moment in modern history, and it changed the relationship between the Western world and the Middle-East forever. But who is to blame? Many people believe the attacks on the Twin Towers were terrorist attacks, planned and coordinated by Osama Bin Laden, leader of Al-Qaeda ? the alleged perpetrators. Others, on the other hand, go down the conspiracy route. They argue the attacks were planned and carried out by the American government, just so the US could have an excuse to go to war with Iraq. On September 11th, 2001, a total of 2,977 [1] deaths were recorded ? including 19 [2] terrorists ? there were also over 6,000 [3] injuries, with four planes being hijacked. Two of these planes, American Airlines Flight 11 and United 175, hit the towers of the World Trade Centres, another plane, American Airlines 77, flew into and damaged the Pentagon, and the other crashed in a field near Shanksville, Pennsylvania, after being overturned by the passengers on board United 93 in a seemingly brave and courageous act of self sacrifice. ...read more.

“But then, what about the explosions?” conspiracy theorists retort, arguing that the planes didn’t make the towers collapse, but bombs did. The World Trade Centre collapse appeared identical to a controlled demolition. Many speculate that in fact the towers were in blown with explosives placed in select locations. "It is quite plausible that explosives were pre-planted in both World Trade Centre buildings”, professor Steven E. Jones says in November 2005 [5]. Many people at the site of 9/11 during the collapse of the buildings recall hearing explosions inside the building as they attempted to escape. Craig Carlsen, a fire fighter in the F.D.N.Y states: "I guess about three minutes later you just heard explosions coming from the bottom of building two, the south tower. It seemed like it took forever, but there were about ten explosions” [6]. Now, how could an aircraft impact at floors 78 and above of the second World Trade Centre tower cause numerous explosions at the base of the building? Scientists also agree with the bomb theory because they argue that a planes fuel cannot produce enough heat to melt the steel frame that held the two buildings that collapsed. FACT – Jet fuel burns at 800° to 1500°F, not hot enough to melt steel (2750°F). ...read more.

It has been recognised that over 4,000 Jewish employees did this.. Some of the first people to record that attacks on camera were Jewish, too. Many people became suspicious and put them on the radar as suspects in the wake of the attack. But then again, in the wake of the fire and screaming, everybody was a suspect. The US is known for their eagerness to point the finger. The September 11th attacks were a monumental and horrendous ordeal for the nation of America and the majority of the global population. The US government are to blame. Why would they not move to stop the terrorists when they knew about the attack? The phone calls? The explosions? The ?stand down? order? The Jewish workers having prior knowledge about the attacks having received information from American government officials inside the white house? It all fits! It was one of the most heart-wrenching moments in history, and out of the chaos, smoke and death came a new western world, which would never be the same again, and the peoples? trust in America will forever be a tender topic. [1] ? http://en.wikipedia.org/wiki/September_11_attacks [2] ? http://en.wikipedia.org/wiki/September_11_attacks [3] ? http://en.wikipedia.org/wiki/September_11_attacks [4] ? http://en.wikiquote.org/wiki/George_W._Bush#2001 [5] ? http://www.cam.net.uk/home/aaa315/peace/explosions.htm [6] ? http://whatreallyhappened.com/WRHARTICLES/911_firefighters.html [7] ? http://www.popularmechanics.com/technology/military/news/debunking-911-myths-world-trade-center [8] ? http://newsone.com/newsone-original/samalesh/the-11-most-compelling-911-conspiracy-theories/ [9] ? http://www.youtube.com/watch?v=ryuYLUVX4VM [10] - http://www.nowtheendbegins.com/pages/israel/were-4000-jews-told-to-stay-home-on-911.htm . ...read more.