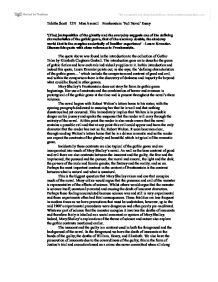 [The] juxtaposition of the ghastly and the everyday suggests one of the defining characteristics of the gothic genre, that of the uncanny double, the shadowy world that is the complex underbelly of familiar experience(TM) &quot;L

'[The] juxtaposition of the ghastly and the everyday suggests one of the defining characteristics of the gothic genre, that of the uncanny double, the shadowy world that is the complex underbelly of familiar experience' -Laura Kranzler. Discuss this quote with close reference to Frankenstein. The quote above was found in the introduction to the collection of Gothic Tales by Elizabeth Cleghorn Gaskell. The introduction goes on to describe the genre of gothic fiction and how each tale individually applies to it. In this introduction and indeed this quote, Laura Kranzler points out, as she says, the 'defining characteristics of the gothic genre...' which include the comparison and contrast of good and evil, and within the comparison there is the discovery of darkness and impurity far beyond what could be found in other genres. Mary Shelley's Frankenstein does not stray far from its gothic genre beginnings. Her use of contrasts and the combination of horror and romance is prototypical of the gothic genre at the time and is present throughout the novel's three volumes. The novel begins with Robert Walton's letters home to his sister; with the opening paragraph dedicated to ensuring her that he is well and that nothing disastrous had yet occurred. ...read more.

This is proved when the monster meets the blind old man; verbally the monster is convincing as an ordinary human being and manages to impress the old man with manners and a plea for help, it isn't until the seeing members of the family enter the room that chaos occurs since they make a snap judgement about his intentions based on his appearance and his appearance alone. The monster is also imprisoned by the threats that he makes; the chilling 'I'll be with you on your wedding night...' comment is made in response to Victor's destruction of the monsters potential mate. The monster has made the threat and fully intends to stick to it and in this he is imprisoned by the looming death of another innocent. Contrasting the imprisoned are the free; the number of free characters is large to begin with but slowly diminishes as the novel wears on and the burdens of each character are apparent. William Frankenstein is a young boy and so it would appear that he should be free and yet he is killed by Frankenstein's monster. Henry Clerval would be among the most free of the characters (though it should be pointed out that he is weighted by the burden of Frankenstein's personality and indeed the emotional burden of the Frankenstein family) ...read more.

In both looks; 'lustrous black hair...straight black lips' 'her hair was the brightest living gold....cloudless blue eyes' and personality; 'so distinct in their sensitivity and sweetness that none could look on her without believing her to be of a distinct species' 'while it's unearthly ugliness rendered it almost too horrible to be observed with human eyes'. At the same time these two characters pair in a way that is also typical of the gothic genre. Elizabeth is described as a distinct species in the quote above, this is commenting that perhaps she is more than human, pieced together with human body parts to create something of a higher status than a human. This sounds very similar to the monster though he is at the opposite end of the scale. He is pieced together with human parts but combined he is considered a distinct species that is less than human. Perhaps this is because he is constructed of dead body parts or maybe it is because his creation is so unnatural. In any case this contrast between the celestial beauty of Elizabeth and the unearthly ugliness of the monster is the very essence of the gothic genre especially since this important contrast contains small traces of parallels. Mary Shelley's novel Frankenstein therefore follows and includes the gothic genre in its formation. ?? ?? ?? ?? Tabitha Scott 12N Miss Avanall Frankenstein 'Full Novel' Essay ...read more.