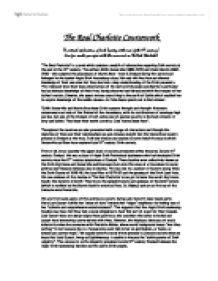 A critical exploration of Irish Society at the end of the 19th century. How far would you agree with this comment on The Real Charlotte?

The Real Charlotte Coursework "A critical exploration of Irish Society at the end of the 19th century". How far would you agree with this comment on The Real Charlotte? "The Real Charlotte" is a novel which contains a wealth of information regarding Irish society at the end of the 19th century. The authors Edith Somerville (1858-1949) and Violet Martin (1862-1915) - who adopted the pseudonym of Martin Ross - lived in Ireland during this period and belonged to the landed Anglo-Irish Ascendancy class. Not only did they have an inherent knowledge of their own class but they also had a deep understanding of the Irish peasantry. This stemmed from their keen observations of the native Irish people and Martin in particular had an intimate knowledge of their lives, having observed and interacted with the tenants of her father's estate. Likewise, she spent sixteen years living in the north of Dublin which enabled her to acquire knowledge of the middle classes. As John Bayley points out in the Listener : "Edith Somerville and Martin Ross knew Irish manners through and through: they were connoisseurs not only of the Ireland of the Ascendancy, with its ramifications of cousinage high and low, but also of the Ireland of turf-cabins and of genteel poverty in the back streets of Bray and Dublin. They knew their world as well as Jane Austen knew hers". Throughout the novel we are also presented with a range of characters and through the depiction of them and their relationships we gain immense insight into the hierarchical society present in Ireland at the time. I will now discuss and analyse in more detail the ways in which Somerville and Ross have explored late 19th century Irish society. First of all, let us consider the upper class of society presented within the novel. In late 19th century Ireland, this was a class of Anglo-Irish Protestant landowners who had dominated Irish society since the 17th century plantations of Ireland. ...read more.

Mullen's wish for her to take care of Francie. We witness Charlotte evicting Francie from Tally-Ho Lodge; her offence being her refusal to Christopher Dysart's marriage proposal. This highlights how much Charlotte wants to climb the social ladder and reflects the malignity and greed which Edith saw in Emily Herbert. We equally see evidence of Charlotte's social ambitions in the way she has "many tones of voice, according with the many facets of her character". This social adaptability is aptly described by Declan Kiberd in Inventing Ireland : "The indeterminate status of Charlotte Mullen ... allows her to speak on self-confident terms with the lady of the manor or, conversely, employ the Irish language to intimidate her tailor, Danny Lydon, or her powers of English to frighten the washerwoman tenants of her cottages." This accentuates the fact that the 'real' Charlotte is a crafty character who, in reality, is nothing like the amiable facade she adopts when in the company of the Dysarts. Her calculating nature is also shown to us in the way she adroitly manipulates the other characters using the "sheer strength of her will". The most striking example of this is the fulfilment of her plan to acquire the leasehold of Gurthnamuckla and, in the words of Norry the Boat, to "let on she's as grand as the other ladies in the counthry". However, we see Charlotte's desire for Lambert thwarted by his marriage to Francie. This means she can no longer accomplish her plans to "stable their horses together" at Gurthnamuckla and she sees herself "helpless and broken" and "aimless for the rest of her life". This implies to the reader that the middle class 'grabbers' could not have all that they desired - they may have been able to acquire land and emulate the aristocracy but there were limits to what they could achieve through ambition and craftiness. Like Charlotte, the egotistical and pompous Lambert also suffers the despair which accompanies unrealized ambitions. ...read more.

Therefore, the authors have presented Billy Grainy and Nance the Fool as rather frightening and ill-dignified characters; suggesting a lack of compassion on their part for the less fortunate members of Irish society. This is equally notable when we read about the washerwomen who live in Ferry Row. They do not "assimilate the principles of their trade" and we are told that their "filthy children" play among the puddles and that a "slatternly woman" can be found at the lake shore washing clothes in a manner according to the "immemorial custom of their savage class". This clearly conveys a certain amount of insensitivity on the part of Somerville and Ross for the poor women in late 19th century Ireland who lived in similar circumstances to these washerwomen. Another way in which the authors explore Irish society at the end of the 19th century is through their presentation of the unfortunate character of Julia Duffy. We are informed that she is the daughter of a wealthy Protestant farmer who married his poor Roman Catholic dairymaid. This ultimately leads to "social ruin and decay" (Cronin) for Julia as she descends into poverty and loses the leasehold of Gurthnamuckla. This reflects the fact that in late 19th century Ireland marriage between Protestants and Roman Catholics was not the 'done' thing and often proved to be socially ruinous. In conclusion, it can be gathered that Somerville and Ross clearly had a thorough knowledge and understanding of the various social classes which existed in Ireland in the late 19th century. In 'The Real Charlotte' they make a "serious attempt to display a more and less complete society" (Moynahan) and offer their readers an accurate and comprehensive depiction of the Anglo-Irish Ascendancy class, the "sloughs of middle class Irish society" and the lower class of Irish peasants and beggars. Ultimately, Edith Somerville and Violet Martin present us with a compelling novel which, in my view, is undoubtedly a critical exploration of Irish society at the end of the 19th century. ...read more.