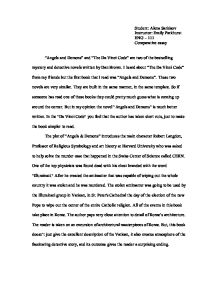 Angels and Demons and The Da Vinci Code

Student: Alena Sarkisov Instructor: Emily Parkhurst ENG - 111 Comparative essay "Angels and Demons" and "The Da Vinci Code" are two of the bestselling mystery and detective novels written by Dan Brown. I heard about "The Da Vinci Code" from my friends but the first book that I read was "Angels and Demons". These two novels are very similar. They are built in the same manner, in the same template. So if someone has read one of these books they could pretty much guess what is coming up around the corner. But in my opinion the novel "Angels and Demons" is much better written. In the "Da Vinci Code" you feel that the author has taken short cuts, just to make the book simpler to read. The plot of "Angels & Demons" introduces the main character Robert Langdon, Professor of Religious Symbology and art history at Harvard University who was asked to help solve the murder case that happened in the Swiss Center of Science called CERN. ...read more.

The novel is written in a genre of an intellectual detective thriller. "The Da Vinci Code" is a great history lesson about ancient Christianity and matters related to The Holy Grail. This book starts out with the same character Robert Langdon, solving the murder of the professor Jacques Sonera of the Louvre Museum in Paris. The body of Sonera was found in the Louvre bared and located the same as in Leonardo da Vinci's well-known drawing "Vitruvian Man", with the ciphered inscription on its chest. This inscription on the body specifies that it is necessary to search for a key to secret of murder in Leonardo da Vinci's works. Robert Langdon used the works of Da Vinci as "Mona Lisa" and "The Last Supper" which give him clues to this puzzle. In the novel there are some parallel subject lines in which various characters participate. ...read more.

There are four brutal murders at the center of the plot of both books. In both books, a message is written on papyrus-based paper. This is later destroyed when the paper comes into contact with vinegar and water. "Angels and Demons" has a more suspenseful storyline with the antimatter bomb and the race to prevent the destruction of Vatican City. On the other hand "The Da Vinci Code" was easier to fallow and less farfetched, which is why I think that has made it more popular in the end. "Angels and Demons" does a better job of taking a reader through the mythology (although created mythology) of the Illuminati and the reader "see" it everywhere in the book. The two books differ in setting, threat, and focus. While "The Da Vinci Code" tackles ancient speculations about the Holy Grail, "Angels and Demons" involves more standard thriller fare. For those who love plot-driven novels and for those who love thrillers and mysteries full of strange bits of information that tie everything together, I would advise to read "Angels and Demons". ...read more.