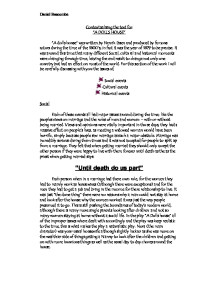 A brief analysis of 'A Doll's House' By Ibsen

Contextualising the text for "A DOLLS HOUSE" "A dolls house" was written by Henrik Ibsen and produced by famous actors during the time of the 1800's; in fact it was the year of 1879 to be precise. It was around this time that many different Social, cultural and historical moments were changing through time, leaving the end result to change not only one country but had an effect on most of the world. For this section of the work I will be carefully discussing with you the issues of; Social events Cultural events Historical events Social Each of these events all had major issues around during the time; like the peoples views on marriage and the roles of men and women - with or without being married. Views and opinions were vitally important in those days, they had a massive effect on people's lives, as meeting a widowed woman would have been horrific, simply because people saw marriage as such a major obstacle. ...read more.

In the play "A Dolls house" all of the improper issues where dealt with accordingly and the play was keep realistic to the time, this is what makes the play a naturalistic play. Nora (the main character) was your usual housewife although slightly luckier as she was more on the wealthier side of things getting a Nanny to look after the children and getting on with more luxurious things as well as the usual day to day chores around the house. Historical Historical events around the time were based mainly around women and their rights i.e. the suffragettes movement. It was around this time that the Danish ruled Norway and introduced the Kroner. But later on in life the Norwegians showed good bouncebackability to fend off the Danish out of their country and back into their own. The inequality of women around the time was unbelievable; they had no say in when they wanted to get divorced, they were not allowed to vote on the prime minister of the country. ...read more.

As Krogstad and Nora could of found out by luckily getting away with fraud, if they were caught it would of probably led to time in the stocks, possibly prison. Divorce was unacceptable, as I have briefly mentioned before. The play itself is poignant as it set around the Christmas holiday, this is a time for giving, loving and sharing etcetera, where as Nora is doing the opposite. Also this is ironic as Nora's father was a priest for the Christian religion. Nora believes in this miracle throughout the whole play, the fact that she is going to be free. Overall, all of these events played a massive role on Henrik Ibsen and influenced him incredibly leading to the naturalistic play of "A dolls house". Without these cultural, historical and social issues taking place the play would not have turned out any thing like it did. Not only did the issues have a massive effect on the play but also the play had a massive effect on the issues. Taking each step a little closer with things like the right for women to vote. Daniel Bascombe ...read more.