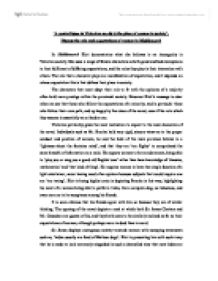 'A central issue in Victorian novels is the place of women in society'. Discuss the role and expectations of women in Middlemarch

'A central issue in Victorian novels is the place of women in society'. Discuss the role and expectations of women in Middlemarch In Middlemarch Eliot demonstrates what she believes is an incongruity in Victorian society. She uses a range of female characters as both good and bad examples as to their fulfilment of differing expectations, and the roles they play in their interaction with others. The role that a character plays is a manifestation of expectation, and it depends on whose expectation this is that defines their place in society. The characters that most adapt their role to fit with the opinions of a majority often hold more prestige within the provincial society. However Eliot's message is clear when we see that those who follow the expectations of a minority, and in particular those who follow their own path, end up happy by the close of the novel, even if the role which they assume is essentially an orthodox one. Victorian patriarchy gives the most inclination to expect to the male characters of the novel. Individuals such as Mr. Brooke hold very rigid, sincere views as to the proper conduct and position of women; he and the bulk of the male province believe in a 'lightness about the feminine mind', and that they are 'too flighty' to comprehend the same breadth of information as a male. ...read more.

Perhaps Dorothea's idea of matrimonial role would have clashed with the majority of the Middlemarch denizens. This certainly appears to be the case at one of Brooke's functions at Tipton Grange when various men discuss her and compare her with Rosamond Vincy. Their expectation of an element of ostentation in women is shown when Mr. Chichely concludes that Dorothea is does not 'lay herself out' enough to please them, and that 'there should be a little filigree about a woman'. This conception of the ideal young woman seems to exhibit itself in Rosamond, whom Chichely would choose above both Dorothea and Celia. Rosamond considers her destined role as a married woman, and, similarly to Celia, pursues elevation in 'that middle-class heaven, rank'. She sees marriage to Tertius Lydgate as desirable because of his 'certain air of distinction congruous with good family' with which she is impressed. She also feels that he has prospects of leaving Middlemarch, which would fit her preferred role perfectly as it would sever connections with her lowborn mother. She is prepared to be utterly subordinate, as long as she is provided with every comfort in which she is accustomed to indulge. Having been 'the flower of Miss Lemon's school' she has been bred into a position of material showiness; her piano playing is delivered 'with the precision of an echo' of Kapellmeister. The fact that her playing resembles an echo removes any element of artistic flair, and shows that she accepts the role as performing merely for the purpose of attention, rather than to enjoy or enhance her musical talent. ...read more.

Dorothea is educated by the failure of her marriage to Casaubon, and is perhaps able to see that their problems arose from his lack of accommodation for her role within the marriage. She marries Will Ladislaw, who would have given up 'everything else in life' only to 'watch over her', and his reverential attitude towards her gives her the scope to pursue her own role in the relationship. This role does include, as she had initially wished, helping a man achieve great feats, by 'being in the thick of a struggle' against the Parliamentary 'wrongs' of the nation. Eliot does not necessarily insist on unorthodoxy in a relationship to give success. She is not particularly writing against patriarchal roles and expectations, as shown when she writes that Dorothea was 'known in certain circles as a wife and mother', despite creating her as exemplary of how she feels the place of women in society should be. The same is true of Mr and Mrs Garth, as she accepts her wifely duty to allow Caleb his power in the household. Eliot is essentially writing against superficial or disrespectful roles, such as the one assumed by Rosamond; she does this by making her marriage a complete failure by the end of the novel. She also writes against the wrongs in the expectations of men towards women, such as the ones that shaped Rosamond into a falsity, and the limiting, restrictive expectations of Casaubon that ruined his marriage to Dorothea. The happiness that exists by the end of the novel are the product of respectful, flexible attitudes towards one another. ...read more.