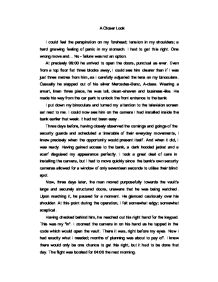 A Closer Look I could feel the perspiration on my forehead; tension in my shoulders; a hard gnawing feeling of panic in my stomach. I had to get this right. One wrong move and... No - failure was not an option. At precisely 08:00 he arrived to open the doors, punctual as ever. Even from a top floor flat three blocks away, I could see him clearer than if I was just three metres from him, as I carefully adjusted the lens on my binoculars. Casually he stepped out of his silver Mercedes-Benz, A-class. Wearing a smart, linen three piece, he was tall, clean-shaven and business-like. He made his way from the car park to unlock the front entrance to the bank. I put down my binoculars and turned my attention to the television screen sat next to me. I could now see him on the camera I had installed inside the bank earlier that week. It had not been easy. Three days before, having closely observed the comings and goings of the security guards and scheduled a timetable of their everyday movements, I knew precisely when the opportunity would present itself. And when it did, I was ready. Having gained access to the bank, a dark hooded jacket and a scarf disguised my appearance perfectly. ...read more.

I quickly looked down at my newspaper, but it was too late. Shit - he knew. Panicking, the man sprinted for his Merc. "GO, GO, GO!" I shouted down my radio. Within a split second my undercover colleagues leapt into action from their ready positions. The man froze in sheer terror surrounded by eight Specialist Firearms Officers each aiming an MSG-90 semi-automatic directly at his head. "Slowly put your hands on your head and kneel down on the ground!" screamed the chief officer. With a look of complete shock and disbelief, the man did as he was told, and as he slowly raised his hands to his head, I could see the silver ring on the middle finger of his right hand. The very same ring I had seen on the CCTV camera as I zoomed in on him tapping in the code for the vault that morning; the very same ring that linked him right into the heart of our investigation. I swiftly made my way over to arrest him. We'd done it. Months and months of close surveillance had finally paid off. We had our man. The passengers on the 04:00 flight to New York would arrive safely. By then the last of the 9/11 terrorists would be firmly behind bars. ...read more.

This keeps the reader entertained through building tension. I also used a balanced complex sentence, "I felt somewhat edgy; somewhat sceptical", enabling me to reflect the precision of the "operation" whilst reinforcing the appeal to my target audience. Whilst I used a variety of sentence structures in my piece, I kept paragraphs quite short. This was in order to stay in keeping with the crime fiction genre and the style models, particularly Cussler's 'The Chase' which also uses short paragraphs. I also decided to keep the narrator's character less developed than I had originally done so in my first draft, similarly to Cussler's narrator who is kept quite restrained also. This has greater appeal to the target audience who are more entertained by action and content rather than longwinded character descriptions. I feel that overall one of the most important linguistic methods I used was the manipulation of the crime lexis. By creating a semantic field of crime and observation through use of words and phrases which are familiar to the target audience, the genre of the piece became clearly defined. I believe another technique that was vital in creating my piece was the use of varying sentence structures. This allowed me to successfully create a discourse structure that remains fluent whilst also keeping the audience entertained and in suspense throughout. ?? ?? ?? ?? ...read more.