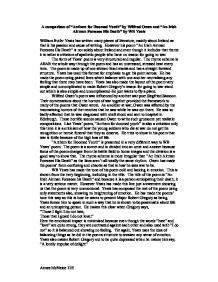 A comparison of &quot;Anthem for Doomed Youth&quot; by Wilfred Owen and &quot;An Irish Airman Foresees His Death&quot; by WB Yeats

A comparison of "Anthem for Doomed Youth" by Wilfred Owen and "An Irish Airman Foresees His Death" by WB Yeats William Butler Yeats has written many pieces of literature, mainly about Ireland as that is his passion and cause of writing. However his poem "An Irish Airman Foresees His Death" is not solely about Ireland and even though it includes that theme it is rather a criticism of apathetic people who have no reason for going to war. The form of Yeats' poem is very structured and regular. The rhyme scheme is ABAB the whole way through the poem and has an unstressed, stressed beat every time. The poem is made up of one sixteen-lined stanza and has a straight forward structure. Yeats has used this format for emphasis to get his point across. He has made the poem using paired lines which balance with one another neutralising any feeling that there may have been. Yeats has also made the layout of the poem very simple and uncomplicated to make Robert Gregory's reason for going to war stand out which is also simple and uncomplicated-He just wants to fly a plane. Wilfred Owen's poem was influenced by another war poet Siegfried Sassoon. Their conversations about the horrors of war together provided the framework to many of the poems that Owen wrote. As a soldier at war, Owen was affected by the traumatising horrors of the trenches that he saw while he was out there. ...read more.

is because this is where Robert Gregory is from and he shows his loyalty to a very small community rather than a country. Robert Gregory then goes on to say, "My countrymen Kiltartan's poor, No likely end could bring them loss Or leave them happier than before." Here he is stating outright that no matter what the outcome of the war, whether he dies or not, the people of his small community will not be affected. Robert Gregory is basically saying here that he is a nonentity and belittling himself by admitting that no one cares what happens to him. This is quite a sad and concerning thing to state with no emotion but this impact has been successfully achieved by Yeats' deliberately holding back on exclamation marks. Exclamation marks portray emotional meaning and passion. Consequently because there are none, it shows how Robert Gregory is feeling which is passionless and accepting and awaiting his fate- imminent death. Another way Yeats' reiterates the feelings of Robert Gregory is by repetition when he is speaking. Gregory says, "The years to come seemed waste of breath, A waste of breath the years behind" The words "waste of breath" are emphasised greatly as not only are they repeated but they are repeated straight after each other, one is at the end of a line and the next is at the start of the following line. ...read more.

He also makes Robert Gregory seem that he is not worthy of respect as he is not going to war for a sense of Nationalistic Pride or a reason that is even remotely patriotic. The person Yeats has chosen to be the subject of the poem was a perfect example to base the poem on as it makes the poem effective and makes the torpid mood of the poem more convincing. Wilfred Owen's poem "Anthem for Doomed Youth" is full of emotion and he has made the mood sad to show the futility of the high loss of life which gives it a more realistic tone. Like Yeats, Owen uses rhyme, rhythm and imagery only he makes his more varied, frequent and complexed. To do this, Owen has used an assortment of literary devices such as metaphors, similes, personification, onomatopoeia and alliteration. This helps Owen to elaborate his poem in more serious, gruesome detail which he often does, even in other literature and a good example of this would be another poem called "Dulce et docormest." He has seen the horror and futility of war first hand and this is reflected through his use of emotive language. The two poems are diverse to one another as Owen uses numerous amounts of imagery and has a lack of structure which results in an abundance of emotion where as Yeats is the complete opposite and comprehends constant structure and image deficiency which consequently leads to a lack of emotion. ?? ?? ?? ?? Aimee McNeice 11E ...read more.