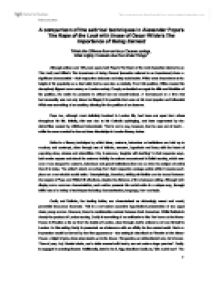 A comparison of the satirical techniques in Alexander Pope's The Rape of the Lock with those of Oscar Wilde's The Importance of Being Earnest "What dire Offence from am'rous Causes springs, What mighty Contests rise from trivial Things" Although written over 150 years apart, both Pope's The Rape of the Lock (hereafter referred to as The Lock) and Wilde's The Importance of being Earnest (hereafter referred to as Importance) share a significant characteristic - their respective elaborate and witty social satire. Wilde wrote Importance at the height of his popularity as a dramatist; but he was also a celebrity. From this position, Wilde created his deceptively flippant commentary on London society. Deeply embedded amongst the frills and frivolities of his position, the satire he presents is critical but not sanctimonious. A homosexual at a time that homosexuality was not only taboo but illegal, it is possible that even at his most popular and influential Wilde was something of an outsider, allowing him the position of an observer. Pope too, although most definitely involved in London life, had been set apart from others throughout his life. Initially, this was due to his Catholic upbringing, and later augmented by the deformities caused by childhood tuberculosis. That is not to say, however, that he was out of touch - whilst he never married he formed close friendships in London literary circles. Satire is a literary technique by which ideas, customs, behaviour or institutions are held up to mockery and contempt, often through use of ridicule, sarcasm, hyperbole and irony with the intent of exposing vices, abuses and absurdities. It is, in essence, 'laughter with loathing'. In their separate ways, both works expose and attack the extreme triviality the authors encountered in British society, which was even more steeped in customs, behaviour and grand institutions (that are so often the subject of satire) than it is today. The writers' attack on society from their respective vantage points within it creates each piece as a remarkable social satire. ...read more.

Aimed at Belinda, such behaviour could be regarded as similar to Algy's towards Cecily when engaging in 'Bunburying'. Whilst he does not have accusations of rape levelled at him, Algernon Moncrieff cannot be regarded as a completely morally wholesome character. His subverted sense of social norms, as displayed in the line: "I hate people who are not serious about meals. It is so shallow of them" are a source of immediate humour but an importance factor in his characterisation. As with the Baron, it is apparent that Algy is immensely proud of himself in every regard, an inflated ego and obvious sense of arrogance beyond his achievements. These characteristics contribute to view of both of them as 'cads' through use of bathos. Both writers have made use of bathos to satirise the characters of Algy and the Baron; whilst the Baron is enormously proud of his achievement in 'raping' Belinda, Algy is deeply concerned that Jack has "no taste in neck ties". This pride and vanity in trivialities and petty things serves to satirise the everyday concerns of the upper classes. The male equivalent of 'ladies who lunch', Pope and Wilde have satirically exaggerated the trifling amusements used to fill the free time of the wealthy into epic concerns, consequentially presenting those engaging in them as 'morally reprehensible' given the levels of unemployment and poverty in London at the times of writing. It is under these circumstances, therefore, that both authors launch their respective scathing attacks on the false values they encountered in their societies. The clearest illustration of this is through both writers' satirical view of religion amongst the classes they describe. In both the Victorian period and the 18th century, piety and devotion were held in high regard. Pope and Wilde, therefore, effectively satirise the notion of 'outward piety', by which the upper classes would assume religion for appearances, used as any other method of social advancement would be. ...read more.

The tone and style used here allows Pope's ironic criticism of Belinda's concerns appear affectionate. Similarly, extensive use of iambic pentameter and decasyllabic lines that Pope makes extensive use of adds to his mock epic style, which imitates the most recognisable aspects of the epic style; its form and elevated language. These combine to create an atmosphere of high classical drama that is supported by the Pope's monosyllabic rhymes of words which, on their own, have an epic tone, such as strain/pain, fame/name and glides/tydes. Much of Pope's language would not be out of place in a serious epic. His use of an inflated style ridicules the pretensions and pomposity of minor quarrels. This satirical technique exposes the limitations of contemporary society by the implicit contrast with an expansive epic world. The idle pursuits of the 'celebrities' of the day and the low pursuits of the inner city were shown to be unworthy of a literary form associated with traditional Greek heroes. The satire of this style lies in the fact that he applies elevated language to 'the life of modern ladies in this idle town', as he described in a letter to one of his lady friends. Importance, by contrast, does not adopt a similar tone; from the outset, it declares itself to be, "A Trivial Play for Serious People". Wilde's use of farce can be regarded as satirical technique, but satire is created in a different manner to that of Pope's mock epic. Farce aims to entertain the audience by means of unlikely and extravagant situations, disguise and mistaken identity, verbal humour including, in Wilde's case, sophisticated puns: "The Importance of Being Ernest" the most obvious example. The ridiculous nature of the style makes the issues and situations Wilde deals with appear equally ridiculous, highlighting their triviality and forming a critical, though affectionate, satricial attack. Wilde's style is augmented by the form of the piece, as a dramatic presentation allows for effective portrayal of the characters. This allows for a more 'slapstick' style of humour playing on 'sight gags' made possible by the form of the piece. ...read more.