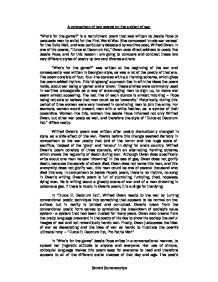 A comparison of two poems on the subject of war, &quot;Who's for the game?&quot; and &quot;Dulce et Decorum Est&quot;.

A comparison of two poems on the subject of war "Who's for the game?" is a recruitment poem that was written by Jessie Pope to persuade men to enlist for the First World War. She composed 'crude war verses' for the Daily Mail, and was particularly detested by wartime poet, Wilfred Owen. In one of his poems, "Dulce et Decorum Est," Owen uses direct address to poets like Jessie Pope, and for this reason I am going to compare and contrast these two very different styles of poetry by two very diverse authors. "Who's for the game?" was written at the beginning of the war and consequently was written in Georgian style, as was a lot of the poetry of that era. The poem consists of four, four-line stanzas with a,b rhyming scheme, which gives the poem added rhythm. This 'sing-song' approach ties in with the ideas the poem holds, about war being a 'game' and a 'show.' These similes were commonly used in wartime propaganda as a way of encouraging men to sign up, to make war seem almost appealing. The last line of each stanza is almost mocking - Pope being not able to believe that men could be so 'cowardly.' Historically, during this period of time women were very involved in convincing men to join the army. For example, women would present men with a white feather, as a symbol of their cowardice. ...read more.

Within her poem, Pope uses many questions, which involve the reader more, and, together with the use of everyday language give the poem a less formal feel. She persuades the men to join the army by making them feel deceitful and cowardly if they were to 'lie low.' She also has a friendly manner in her propaganda poem as she refers to the men as 'lads.' The first three lines in each four-line stanza are all about the heroism and eagerness that each man should feel, while the last line is a cutting remark about the cowardice of men who would not sign up. Pope has written this poem in four quatrains with a regular rhythm and rhyme scheme, which makes the poem more memorable. This is also a technique employed in children's poetry and as such trivialises her subject matter. Only the last stanza is different, instead of questions to her readers, Jessie Pope summarizes her ideas and makes the poem appeal to men as individuals, in the final line '..she's looking and calling for you.' The biggest writing technique that Jessie Pope uses is in her metaphorical language, comparing war to a 'game,' - 'the biggest that's played.' This disillusioned idea exhibits the attitude towards war that woman and children had, back at home in England. Pope continually uses comparisons throughout the four stanzas of the poem, and some onomatopoeia in 'crashing' and 'grip.' ...read more.

However the army generals use the men as pieces in a game, to them the soldiers are just cannon fodder, but in reality they are dealing with somebody's life. This is why Wilfred Owen dislikes Jessie Pope. In the final paragraph, Wilfred Owen takes an immediate shot at Jessie Pope by saying 'you too could pace' and 'if you could hear'. It is trying to say that they should not be able to write about the war when they do not have a clue about the consequences of her poetry. Sarcastically Owen calls the pro-war poet my friend; this implies a fellow poet, Jessie Pope, rather than an actual friend. Being referred to as friend will not offend the pro-war poet yet it shows their responsibility to tell the truth and their adverse effect on the youth. Jessie Pope's poem "Who's for the game?" is a prime example of the persuasive propaganda written to encourage men to go to war. However poetically it is a very simple verse, and, to me, reflecting back on the tragedies that happened, it is almost nauseating to think that Jessie Pope was responsible for persuading men to go to war. In contrast, Wilfred Owen's "Dulce et Decorum Est," is a startling first-hand account of a personal experience, and yet is "impersonal," this man dying could have been anyone of the men who died during the war. For this reason I would conclude that in my opinion, Wilfred Owen's poem is vastly superior to "Who' for the game?" Semini Sumanasuriya ...read more.