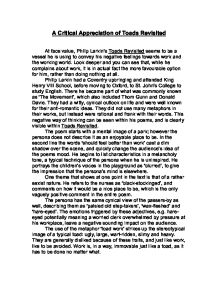 A Critical Appreciation of Toads Revisited

A Critical Appreciation of Toads Revisited At face value, Philip Larkin's Toads Revisited seems to be a vessel he is using to convey his negative feelings towards work and the working world. Look deeper and you can see that, while he complains about work, it is in actual fact the more favourable option for him, rather than doing nothing at all. Philip Larkin had a Coventry upbringing and attended King Henry VIII School, before moving to Oxford, to St. John's College to study English. There he became part of what was commonly known as 'The Movement', which also included Thom Gunn and Donald Davie. They had a witty, cynical outlook on life and were well known for their anti-romantic ideas. They did not use many metaphors in their works, but instead were rational and frank with their words. This negative way of thinking can be seen within his poems, and is clearly visible within Toads Revisited. The poem starts with a mental image of a park; however the persona does not describe it as an enjoyable place to be. ...read more.

Work is, in a way, immovable just like a toad, as it has to be done no matter what. The persona then talks about the people who are dodging the 'toad work', and about how uninteresting their lives must be. In the sixth stanza, the line 'the sun by clouds covered' is a prime example, and the only example of irregular syntax in Toads Revisited. This illustrates the idea of the brain suffering through potential inactivity from sitting around instead of going to work. This idea of inactivity carries on into the next stanza, where the persona trivialises the failures of those ignoring their work, by describing the surroundings as simply 'some bed of lobelias'. This shows the unimportance of these people, and the lack of effect they have on society by not having a source of income. In the eighth stanza, the persona changes the direction of the poem completely. The poem suddenly goes from being a whimsical comment on the world of work to having some sort of a purpose, returning back to his workplace and making the most out of the opportunity he has, no matter how much he dislikes it. ...read more.

The poem itself is set out in a regular fashion, with four lines per stanza, and forms a predictable pattern. This arrangement is a good choice for the poem as it is simple yet effective, and the regular format does not distract from the poem itself, and an irregular layout would not suit the words. One technique that is a common feature in this poem is the persona's decision to use half-rhyme in every stanza. This signifies how the subject of the poem is thinking, his mind may not be all there or he could be distracted, but the main point is that there is something there that is preventing him from rhyming, or prevented from thinking straight. This poem therefore conveys, through negative statements a positive message about working, that even though it may not be a pleasant thing to do, the alternative is much worse. Also, through the poem, the author is able to convey some of his inner thoughts, feelings and opinions, as is traditional in poetry. An example of this is the sexism, which was an inherent part of his personality. ...read more.