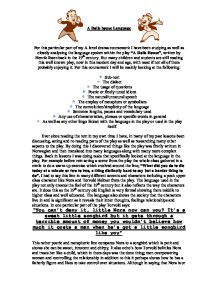 A Dolls house Language For this particular part of my A level drama coursework I have been studying as well as closely analysing the language spoken within the play "A Dolls House", written by Henrik Ibsen back in the 19th century. But many children and students are still reading this well known play, now in this modern day and age, with most if not all of them probably enjoying it. For this coursework I will be mainly looking at the following: * Sub-text * The dialect * The usage of questions * Poetic or finely tuned idiom * The natural/unnatural speech * The employ of metaphors or symbolism * The convolution/simplicity of the language * Sentence lengths, pauses and vocabulary used * Any use of characteristics, phrases or specific words in general * As well as any other lingo linked with the language in the play or used in the play itself. Ever since reading the text in my own time I have, in many of my past lessons been discussing, acting and re-reading parts of the play as well as researching many other aspects to the play. ...read more.

It also echo's how Torvold belittles Nora and treats her like a child, which in them days was the done thing; men overpowering women and controlling the relationship in addition to this it perhaps shows how he has a fatherly figure and likes to take control over situations. Although in saying that Nora is or should I say acts rather childlike and naive herself but at the same time is manipulative, flirtatious and cunning as it proves on the opening line of the play; "Hide that Christmas tree away, Helen. The children mustn't see it before I've decorated it this evening" As well as giving the audience a rough date and establishing shot it shows how Nora seems just as excited about Christmas as the children do. In most houses the children would be helping to set up the Christmas tree but not in the Helmer household Nora is setting up the tree and rather excited about it too. There is some reference to poetry in the text although it is not the rhyming type, it's more a usage of poetic words being exchanged. ...read more.

In addition to this Henrik Ibsen goes that step further and creates for each character there own realm of speech as a quote from the Methuen Student notes verifies: "Ibsen creates for each character a habit of speech appropriate to his or her own class and personality" With Torvold he is spoken with a rather fatherly/paternal type of speech, Krogstad he always reflects to his training as a lawyer, Mrs Linde speaks direct and could appear a bit bitter and cold, Nora is excitable but finds resolve at the end of the play and Dr Rank speaks in riddles and fondness of using figures of speech. Over all this coursework has made me realise how important the lines actually are in a play and how important it is to deliver them correctly. As well as consistency when delivering the lines in a certain way the character must keep delivering them in that way. I personally believe that this may enhance my skills as a yr 12 drama student. ...read more.