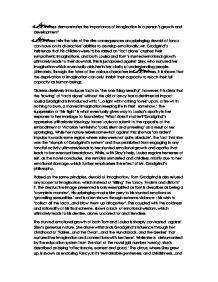 'Hard Times demonstrates the importance of imagination in a person's growth and development' Hard Times tells the tale of the dire consequences an upbringing devoid of fancy can have on its characters' abilities to develop emotionally. Mr. Gradgrind's insistence that his children were to be raised on 'fact alone' crushes their sympathetic imaginations, and both Louisa and Tom's stunted emotional growth ultimately leads to their downfall. This is juxtaposed against Sissy, who nurtured her imagination which eventually aids her in her clarity of understanding people. Ultimately, through the fates of the various characters in Hard Times, it is shown that the deprivation of imagination can only inhibit their capacity to reach their full capacity as human beings. ...read more.

While, with Sissy's help, Louisa regains her sense of self, as the novel concludes, she remains unmarried and childless, mostly due to her emotional damage, which further emphasises the effect of Mr. Gradgrind's philosophy. Raised on the same principles, devoid of imagination, Tom Gradgrind is also refused any scope for imagination, which instead of 'killing' the fancy, 'maims and distorts' it. The destructive image presented is only exemplified as Tom is describes as being a 'complete monster'. His upbringing made him prey to his stunted emotions as 'grovelling sensualities' and is often shown through extreme violence; his wish to 'collect all the facts...and blow them up altogether'. This coupled with the coldness and rationality of his final scheme, shows a lack of emotional wisdom, which ultimately leads to his demise, alone, uncared for and friendless. ...read more.

is the nurturing of her imagination that helps her clarity in understanding people like Harthouse, helps her see through Louisa and Bounderby's marriage and helps her in healing Louisa. Through her colouring, Dickens shows her to be more connected to the earth, more grounded, substantial and real. This physical display of strength reflects the inner strength Sissy possesses. She alone ends up with a happy home, showing the superiority of the 'Faith, Hope and Charity' that the nurturing of her imagination left her with. Hard Times shows that nurturing Fancy instils compassion and emotional maturity, which are essential to lead a meaningful life. Through the fate of various characters, Dickens shows to readers that the values that are 'truly needful' are enriched by the imagination, and that a life starved of imagination is one destined for failure. ...read more.