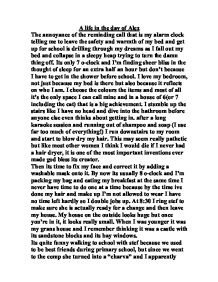 A life in the day of Alex

A life in the day of Alex The annoyance of the reminding call that is my alarm clock telling me to leave the safety and warmth of my bed and get up for school is drilling through my dreams as I fall out my bed and collapse in a sleepy heap trying to turn the damn thing off. Its only 7 o-clock and I'm finding sheer bliss in the thought of sleep for an extra half an hour but don't because I have to get in the shower before school. I love my bedroom, not just because my bed is there but also because it reflects on who I am. I choose the colours the items and most of all it's the only space I can call mine and in a house of 6(or 7 including the cat) ...read more.

At 8:30 I ring stef to make sure she is actually ready for a change and then leave my house. My house on the outside looks huge but once you're in it, it looks really small. When I was younger it was my grans house and I remember thinking it was a castle with its sandstone blocks and its bay windows. Its quite funny walking to school with stef because we used to be best friends during primary school, but since we went to the comp she turned into a "charva" and I apparently turned into a "Goth" which I know I'm not because I don't dress in all black I dress in baggy jeans n' tops which I would say is more punk than anything of the Goth description but we still get along and tell each other all the gossip from the night before; but usually mine is better because charva's don't have gossip because they spread everything they know around anyway. ...read more.

After school if I haven't got work I stay in for a while and laze until about 6! Then I start to do my homework (yeah right) depending on how my day has been I either go in the bath and have an early night or I go on the computer and talk to people on the internet. It may sound silly but I never talk to strangers on the internet I only accept "i.m's" off a name I recognise, some people think that is strange but I think I'm being precautions because not everything and everyone are what they seem. After a world of gossip and arguments I hit back reality and go back to the dreams I was so rudely disturbed from about 16 hours previously but only to be interrupted again in about, oh say in 8 hours time... By Alex Moses Mr Pickering English coursework ...read more.