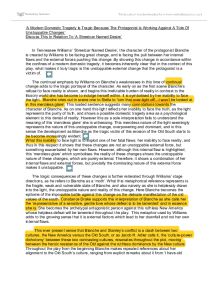 'A Modern Domestic Tragedy Is Tragic Because The Protagonist Is Working Against A Tide Of Unstoppable Changes' Discuss This In Relation To 'A Streetcar Named Desire' In Tennessee Williams' 'Streetcar Named Desire', the character of the protagonist Blanche is created by Williams to be facing great change, and is facing the pull between her internal flaws and the external forces pushing this change .By showing this change in accordance within the confines of a modern domestic tragedy, it becomes inherently clear that in the context of this play, what makes it truly tragic is this unstoppable external change that the protagonist is a victim of. The continual emphasis by Williams on Blanche's weaknesses in this time of continual change adds to the tragic portrayal of the character. As early on as the first scene Blanche's refusal to face reality is shown, and begins this irrefutable burden of reality in contrast to the illusory world she has become to indulge herself within. It is symbolised by her inability to face the light. Blanche cries out in scene one to Stella to 'turn that over-light off...I won't be looked at in this merciless glare'. This loaded sentence suggests many connotations towards the character of Blanche. As on one hand this light reflects her inability to face the truth, as the light represents the purity of truth, and shows a possible domestic tragedy area as a psychological element to this denial of reality. ...read more.

Throughout the play from the beginning Blanche makes repeated references about her alignment to the Old South's culture, ranging from explicit remarks about it from 'I have-old fashioned ideals' to the emotional, personal nature of the culture as she mentions 'Edgar Allan Poe' and other contemporary literary figures of the period. Blanche also values manners. What this does is not just provide the composition of the old Southern values, but to show just how delicate and personal this old culture is. This Modern America is built around the foundations of the industrial revolution that dominated the late 19th and early 20th century. This steep industrialisation proved the rise of the proletariat, symbolised with Stanley, and this pitiless indifference and lack of individuality which makes Blanche's demise so true, as well as tragic. This symbolic representation Stanley provides in this culture battle is shown throughout by Williams to show this unstoppable, dominant change. Arguably Williams created this contrast in imagery to show the tragic nature of this destruction of what was, and how it was these external forces which were causing this. Those who disagree with this analysis argue upon social justifications that the worker supplanting the upper class woman form her aristocratic ledge was justified. Though such connotation is rightly founded, it fails to understand the mechanics of a domestic tragedy, which place this collapse of rational social order as an integral part of tragedy, and Williams uses to this to highlight the tragic nature of competing against such unstoppable external changes. ...read more.

Many cite the early encounter between Blanche and Stanley where she attempts flirting with him, as she 'playfully sprays him with the atomizer....she throws back her head and laughs'. This attempt for many including Elia Kazan, shows the true manipulative side of Blanche. He argues that Blanche is 'dangerous.. Stanley does not want things upset by a phoney, corrupt, sick, destructive woman'. Although it can be understood why this view would be taken, as Blanche does show a flirtatious side and vanity, similar to what is revealed at the 'Flamingo Hotel', but taking this stance does show a degree of ignorance. Blanche's heartfelt, emotional opening up to Stella in Scene five about the way she acts provides a just explanation for these types of actions. She explains that 'soft people have got to-shimmer and glow-put a- paper lantern over the light' as 'men don't acknowledge your existence unless your making love to them'. She ends with 'I'm fading now'. What this shows that these unstoppable changes have caused her to put up a fa�ade, a false pretence to resist these changes, and in fact this sad attempt only reiterates the unstoppable changes as what makes a tragedy truly tragic in this play. The character of Blanche in Williams' play becomes the archetypal tragic anti-hero, as someone torn between her internal flaws and the external forces which arise in the events and circumstances of the play. But ultimately these changes cause her downfall as they are an unstoppable external force, and not caused by her own internal flaws. ...read more.

This essay shows a good overview of the text and demonstrated evidence of wider research into context and tragedy features. To achieve top standard, the writer should aim to integrate and analyse more textual detail.