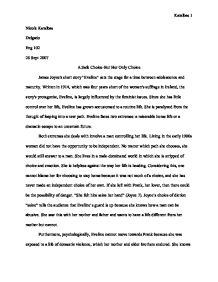 A Safe Choice-But Her Only Choice

James Joyce's short story "Eveline" sets the stage for a time between adolescence and maturity. Written in 1914, which was four years short of the women's suffrage in Ireland, the story's protagonist, Eveline, is largely influenced by the feminist issues. Since she has little control over her life, Eveline has grown accustomed to a routine life. She is paralyzed from the thought of leaping into a new path. Eveline faces two extremes: a miserable home life or a dramatic escape to an uncertain future.

Both extremes she deals with involve a man controlling her life. Living in the early 1900s women did not have the opportunity to be independent. No matter which path she chooses, she would still answer to a man. She lives in a male-dominated world in which she is stripped of choice and emotion. She is helpless against the way her life is heading. Considering this, one cannot blame her for choosing to stay home because it was not much of a choice, and she has never made an independent choice of her own. If she left with Frank, her lover, then there could be the possibility of danger. “She felt him seize her hand” (Joyce 7). Joyce’s choice of diction “seize” tells the audience that Eveline’s guard is up because she knows how a man can be abusive. She saw this with her mother and father and wants to have a life different from her mother but cannot.

Furthermore, psychologically, Eveline cannot move towards Frank because she was exposed to a life of domestic violence, which her mother and older brothers endured. She knows how violent a man who at times can be even kind, funny, and sweet. “She remembered her father putting on her mother’s bonnet to make the children laugh” (Joyce 6). That same man turns into an aggressive, ruthless man who selfishly makes his daughter feel guilty about herself. On the other hand, she has known him her entire life. Her older brothers used to take the beating and now that they are not there “…he had begun to threaten her and say what he would do to her for only her dead mother’s sake” (Joyce 4-5). If she has gone 19 years without a beating, then there would be a good chance of his threats as just talk. Since he says, he will not hit her for “her dead mother’s sake,” then one would think he would honor his word for the respect of his deceased wife.

All of Eveline’s life has revolved around her family. She runs her household domestically and works for a living in which all her earnings wind up with her father. In addition, she manages to care for her two younger siblings seeing them to school and preparing dinner. Since the death of her mother, she took over domestically and maternally with no choice. Her mother, on her deathbed, made Eveline “promise to keep the home together as long as she could” (Joyce 6). By doing so her mother has caused another obstacle Eveline must face in order to leave, that is the guilt of a broken promise. As any good daughter would, she stays to fulfill her vow. This vow gives Eveline another excuse to stay home and carry out her routine life.

In addition, Eveline knows the difficulties of her life but she still prefers it. Joyce explains Eveline’s view of her life “…a hard life but now that she was about to leave it she didn’t find it a wholly undesirable life” (5). Any modern day daughter with those responsibilities would find that a very undesirable life, but Eveline changing her mind about leaving shows the reader how she cannot bear to abandon her family and this life, which has been the only thing, she has known her whole life. Because compared to an unknown destiny, Eveline would much rather stay home and be miserable because she would expect this. Being a woman with little say in her everyday life, the present opportunity is new to her, and she cannot make a major decision on her own because she has never had to.

Eveline has been given an opportunity to flee home in hopes of happiness, but she could not risk a life of uncertainty. Frank, a sailor, offers a chance of happiness to her and “…she had begun to like him” (Joyce 6). Eveline says that she “like(s)” him; not loves. Can their “like” for one another be enough to survive in the New World? Joyce says that Eveline “begun” meaning she barely knew if she was interested in him not if she was ready for a lifetime commitment.

Eveline’s upbringing influences her adult decisions because she has never known anything but Ireland. The fear of leaving home is essentially, why she doubts Frank. A future with him is not set in stone; thus, it cannot be. As one might foreshadow, “she chooses the hell she knows rather than the possible hell of the unknown” (Rogers 172). Hell here symbolizes the men and she would much rather be with the familiar than the unfamiliar. She likes to play it safe because if Frank turns out to be the worst, then where will she go since going back home is not an option.

As they are ready to begin this epic adventure in her life, Eveline believes that “…he would drown her. She gripped with both hands at the iron railing” (Joyce 7). The first part “he would drown her” meaning he would not save her from this wretched life. This is a change of setting from the window seal to the sea. The window was sturdy, whereas, the sea is constantly moving. She is unable to adjust to this new path because she believes Frank cannot guarantee a life better than her home. “She gripped with both hands at the iron railing” symbolizes her paralysis. The iron railing signifies the home ground and she grips on the rail for dear life. Her actions tell the reader how fearful she is to leave her homeland.

Eveline does not want to depart the only thing she has known. Eveline’s life is routine from the footsteps in front of her house to turning her wages to her father every week. “But Eveline… perceives any and every change as a loss… she knows this with her head, her heart rejects it…” (Rogers 171- 172). Eveline cannot seem to grasp the changes around her as a positive because deep inside her she knows where she must be, at home. Meeting Frank was a change to her and instead of embracing it; she ultimately fears it. Even, if staying home will most likely lead to a miserable life one like her mother’s, she would because she cannot accept change.

Today, most young women have not had to endure a “life of commonplace sacrifices” (Joyce 6). Sadly, Eveline has no choice but to stick to the familiar and steer away from any fickle opportunities. If Joyce set the setting during a modern era, then Eveline would be more aware of the opportunities there are now. Furthermore, the world today has come along way and is not as male-dominated as before.