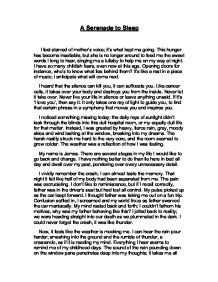 A Serenade to Sleep I feel starved of mothers voice; its what kept me going. This hunger has become insatiable, but she is no longer around to feed me the sweet words I long to hear

A Serenade to Sleep I feel starved of mother's voice; it's what kept me going. This hunger has become insatiable, but she is no longer around to feed me the sweet words I long to hear, singing me a lullaby to help me on my way at night. I have so many childish fears, even now at this age. Opening doors for instance, who's to know what lies behind them? It's like a rest in a piece of music; I anticipate what will come next. I heard that the silence can kill you, it can suffocate you. Like cancer cells, it takes over your body and destroys you from the inside. Never let it take over. Never live your life in silence or leave anything unsaid. If it's 'I love you', then say it. It only takes one ray of light to guide you, to find that certain phrase in a symphony that moves you and inspires you. I noticed something missing today: the daily rays of sunlight didn't leak through the blinds into this dull hospital room, or my equally dull life for that matter. Instead, I was greeted by heavy, fierce rain, grey, moody skies and wind lashing at the window, breaking into my dreams. The harsh reality struck me hard to the very core, and the room seemed to grow colder. The weather was a reflection of how I was feeling. ...read more.

I didn't plan on running forever, but I found myself running all my life. My thoughts return back to father, I like to think of him every now and again. He was a gentle and caring person. Mother and father were a perfect fit for each other, they were pleasant chords harmonising one another. My happiest memories were with father, learning how to play the piano. I remember hearing him play frequently. I would sit back and stare in amazement as his fingers raced up and down along the smooth keys so effortlessly. I was overcome with so much rapture that at times I cried. I didn't know father had such a gift. My fingers itched to touch the keys, there was energy bursting from within me, ready to be released through the tips and applied to the piano. I longed to be in father's seat, the performer. I wished so badly, every Christmas and every birthday, to be able to sit down and play for hours on end to myself, for myself and not just to impress daddy. Wow, it's been a long time since I called him that. He was always out travelling, performing. The only time I saw him was when he came home to see mother. Sometimes he ate dinner with us and put me to bed afterwards. If I was lucky, mother would put me to bed instead, and I was allowed to lie awake and listen to father practising oh so faintly, but beautifully. ...read more.

I discovered just a few months ago from now, I had contracted the same disease father had. I was terrified; it felt like the dreaded cancer cells had taken over, destroying me, slowly. I was dying. The silence and the dark had caught up with me. Death had come knocking and it was my turn. I'm terminally ill. Memories flood back, so does the energy. Nostalgia sweeps over me, and hits me hard. I want to touch the keys one last time, the warm notes filling the air and the world around me. I have my regrets. There ups and downs in my life. You could say this is where the sharps become the minors. I wonder if I'm a coward for doing this, well it's too late to turn back now. The nurse comes in and interrupts my flashbacks, armed with a harmless glass filled with a drink, a deadly drink, which will finish me off once swallowed. Here I am in Dignitas in Switzerland. I start to doubt, I've left everything behind for this euthanasia. When mother said run, she didn't mean forever, I just didn't understand. I was blinded by my ignorance. This is the minor chord in my lullaby. It doesn't fit in, but it will surely lead me on my way. I take hold of the glass and pour the drink; it slips down my throat and goes in for the kill. The sun has gone forever, but I'll be seeing another light. ...read more.