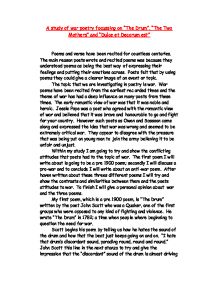 A study of war poetry focussing on "The Drum", "The Two Mothers" and "Dulce et Decorum est" Poems and verse have been recited for countless centuries. The main reason poets wrote and recited poems was because they understood poems as being the best way of expressing their feelings and putting their emotions across. Poets felt that by using poems they could give a clearer image of an event or topic. The topic that we are investigating in poetry is war. War poems have been recited from the earliest recorded times and the theme of war has had a deep influence on many poets from these times. The early romantic view of war was that it was noble and heroic. Jessie Pope was a poet who agreed with the romantic view of war and believed that it was brave and honourable to go and fight for your country. However such poets as Owen and Sassoon came along and expressed the idea that war was wrong and seemed to be extremely critical war. They appear to disagree with the pressure that was being put on young men to join the army believing it to be unfair and unjust. Within my study I am going to try and show the conflicting attitudes that poets had to the topic of war. ...read more.

My second poem is a pro war poem called "The Two Mothers," written by Matilda Betham-Edwards. She was a very famous Victorian writer who worked in her youth with Charles Dickens. From this poem you can see very clearly that it is a pro war poem as it quite purposely tries to put pressure on men to join the army. The poem starts of with a kind stranger talking to the poor woman; the stranger says, "You must be mourning a son who has lately fought and died." But the poor woman says, "I don't mourn a son who has gone and fought in a war but instead I mourn of shame for I have 3 strong sons but not one of them will risk their lives for England." After I had read this poem I saw it as very clever because it manages to put pressure on young men to join the army without actually mentioning anything about men having to go to war. In this poem Matilda Betham tries to put across the argument that if you don't fight for your country your mother will be ashamed of you. When you read the poem you can see that it is aimed at all the men in England. ...read more.

For example Jessie Pope was one of these poets who believed in the romantic image of war that it was honourable to die for your country but Wilfred Owen believes that going to fight a war is wrong. He has seen the reality of war and condemns people for putting pressure on young men to join the army. Out of the three poems I have studied "The Drum" and "Dulce et Decorum est" could be described as anti-war poems as they are very critical of war and the poem "The Two Mothers could b described as a pro war poem as it tries to pressurise men into joining the army. My favourite of the three poems would have to be "Dulce et Decorum est" I like this poem a lot because it is very descriptive and it gets Owen's point of view across very well. Before I read Owens poem I believed that it was a good thing, men going to fight for their country but after reading Owen's poem my whole opinion of war was changed dramatically; now I believe that war is horrific and going to fight for country is stupid although some people see refusing to fight as cowardly. The words Owen uses to describe war put you off the whole idea completely and make you think war is the most terrible thing in the world. ...read more.