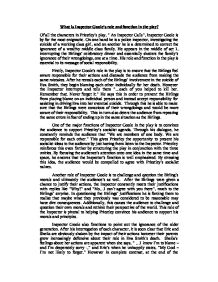 What is Inspector Goole's role and function in the play? Of all the characters in Priestley's play, " An Inspector Calls", Inspector Goole is by far the most enigmatic. On one hand he is a police inspector, investigating the suicide of a working class girl, and on another he is a determined to correct the ignorance of a wealthy middle-class family. He appears in the middle of act 1, interrupting the Birlings' celebratory dinner and essentially shatters the family's ignorance of their wrongdoings, one at a time. His role and function in the play is essential to its message of social responsibility. Firstly, Inspector Goole's role in the play is to ensure that the Birlings feel aware responsible for their actions and dissuade the audience from making the same mistakes. After he reveals each of the Birlings' involvement in the suicide of Eva Smith, they begin blaming each other individually for her death. However the Inspector interrupts and tells them "...each of you helped to kill her. ...read more.

By stressing this idea, the audience would be compelled to agree with Priestley's socialist values. Another role of Inspector Goole is to challenge and question the Birling's morals and ultimately the audience's as well. After the Birlings were given a chance to justify their actions, the Inspector constantly meets their justifications with replies like "Why?" and "No...I can't agree with you there", much to the Birlings' surprise. In questioning the Birlings' justifications he is forcing them to realise that maybe what they previously was considered to be reasonable may have dire consequences. Additionally, this causes the audience to challenge and question their own morals and rethink their perspective of the world. This role of the Inspector is pivotal to helping Priestley convince his audience to support his morals and principles. Inspector Goole also functions to point out the ignorance of the older generation. After his interrogation of each character, it is soon clear that Eric and Sheila are obviously shaken by the impact of their actions however their parents grow increasingly defensive about their role in Eva Smith's death. ...read more.

Lastly and most importantly, Inspector Goole's role is to represent Priestley himself in the play. Near the end of the play, Inspector Goole reminds the audience that we are part of one community and are responsible for one another and if man does not learn this lesson then "they will be taught it in fire and blood and anguish." This statement represents Priestley himself reminding the audience that we they will have to learn to look after each other, and that they are responsible for their own actions. By having Inspector Goole say this Priestley can express his concern over the state of matters in the world, and persuade the audience to do something about it. In conclusion, Inspector Goole's overall role and function in the play is to provide a medium through which Priestley can convey his thoughts and values towards the audience and encourage them to have second thoughts about the way we view the world and how everyone is connected to one. He is a catalyst whose thorough investigation of the Birlings reveals the flaws in the current society, and helps persuade the audience to realise them. ...read more.