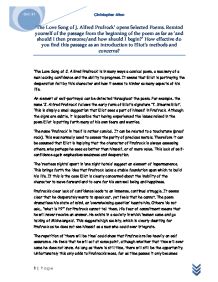 The Love Song of J. Alfred Prufrock opens Selected Poems. Remind yourself of the passage from the beginning of the poem as far as and should I then presume/and how should I begin? How effective do you find this passage as an

'The Love Song of J. Alfred Prufrock' opens Selected Poems. Remind yourself of the passage from the beginning of the poem as far as 'and should I then presume/and how should I begin?' How effective do you find this passage as an introduction to Eliot's methods and concerns? 'The Love Song of J. Alfred Prufrock' is in many ways a comical poem, a mockery of a man lacking confidence and the ability to progress. It seems that Eliot is portraying the desperation felt by this character and how it seems to hinder so many aspects of his life. An element of self-portrayal can be detected throughout the poem. For example, the name 'J. Alfred Prufrock' follows the early form of Eliot's signature 'T. Stearns Eliot'. This is simply a small suggestion that Eliot sees a part of himself in Prufrock. Although the signs are subtle, it is possible that having experienced the issues raised in the poem Eliot is putting forth many of his own fears and worries. The name 'Prufrock' in itself is rather comical. ...read more.

He talks of preparing 'a face to meet the faces that you meet'. This suggests that he lacks the confidence to be himself. The only time that he feels confident to meet others in when he can hide behind a false persona, as far from who he really is as possible. The reader now sees what a lonely and rather pathetic being Prufrock really is. The damage that he does to himself through his lack of drive is huge. He has an obsession with time, yet suffers from the inability to ever make a decision. It is as if he has convinced himself that time will wait for him, unfortunately for him time does not. Prufrock watches as 'in the room the women come and go'. It is clear that he observes others yet does not act himself. Eliot is continually building the impression that he cannot make progress, no matter how many hours he spends watching and producing false promises. He appears paranoid repeatedly asking himself rhetorical questions such as 'Do I dare? ...read more.

Therefore he is too full of complete terror to ever try. He continually adds to this by reminding himself of the terrible situation that he would likely be left in. The final show of this desperation is when he asks openly, 'And how should I begin?' The reader must question to whom Eliot is turning to. Perhaps he is indicating that Prufrock has a duel personality, one which he begs for advice. On the other hand it could be that he simply has reached the end of his wits and is forced to cry out for help, although possibly knowing that none will come. In conclusion, the opening passage is an extremely effective opening to Eliot's methods and concerns. He is clearly painting a vivid image of Prufrock as a character overwhelmed by his inability to move forward in life. The reader is struck by what a seemingly pathetic and partially comical character he actually is. The suggestions of self-portrayal also give an insight into the life of the poet. J. Alfred Prufrock is possibly a representation of many of Eliot's fears, making this passage extremely useful as an insight into Eliot and his thoughts. ?? ?? ?? ?? Christopher Alton 1 | Page ...read more.