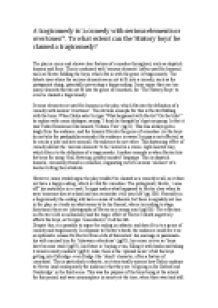 A tragicomedy is a comedy with serious elements or overtones*. To what extent can the History boys be classed a tragicomedy?

﻿A tragicomedy is ?a comedy with serious elements or overtones?*. To what extent can the ?History boys? be classed a tragicomedy? The play is comic and shows clear features of comedies throughout, such as slapstick humour and farce. This is combined with ?serious elements? (often used for humour) such as Hector fiddling the boys, which fits in with the genre of tragicomedy. The debate rises where the serious elements seem not to fit into a comedy, such as the protagonist dying, potentially preventing a happy ending. Some argue there are too many elements that do not fit into the genre of comedies, for ?The History Boys? to even be classed a tragicomedy. Serious elements are used for humour in the play, which fits into the definition of a comedy with serious ?overtones?. The obvious example for this is Hector fiddling with the boys. When Dakin asks Scripps ?What happened with Hector? On the bike?? he replies with comic dialogue, saying ?I think he thought he?d got me going. ...read more.

his career is over as ?boys have become work?(pg95), his future is ?buying a van, filling it with books and taking it round country markets?(pg94). Also, there is the ?splenid news? of all the boys getting into Oxbridge- even Rudge (the ?dumb? character, often a feature of comedies). This is particularly cathartic, as it structurally mirrors how Dakin explains to Hector (and consequently the audience) that they are ?all going in for Oxford and Cambridge? in the third scene. This was the purpose of the boys being at the school for this period, and was commonplace in society at the time, when there was (and still is) huge competition to get into Oxbridge (the top two universities of Britain*). For the audience to watch them work for it and achieve their aspirations, a sense of catharsis is created, resulting in a happy ending, especially as the boys are mainly successful in their future lives, becoming ?solicitors? and ?chartered accountants?(pg107). As the ending is happy, it can fit into the genre of tragicomedy. ...read more.

Bennett could be raising the serious issue of teaching methods, as Posner was the only one that failed, but the ?only one who truly took everything to heart?(Pg108) from Hector. This suggests Irwin?s methods are better, which rings true in Bennett?s personal life, who claimed he used Irwin?s methods to get in to Oxford. Furthermore, Posner contributes to the genre of comedy by creating humour. Verbal humour is used when he lists his problems and concludes that he is ?fucked?, one of play?s famous lines. There are other serious messages throughout the play that also create humour, such as Hector?s message of ?pass the parcel? with literature. For example, Hector making the boys recite poems and being appalled by Irwin?s suggestion to use quotations he had taught to be ?trotted out to make a point?(Pg48) is a form of absurd behaviour, common in comedies. A teacher?s job is to help make students make points and do well in exams- Hector does not see this. These ?serious elements? have important messages, but also create humour, which fits in to the genre of tragicomedy. Erma Bombeck once said ?there is a thin line that separates laughter and pain, comedy and tragedy, humour and hurt?. ...read more.