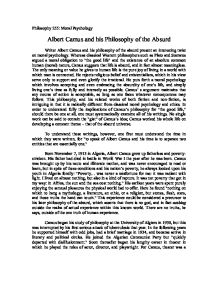 Albert Camus and his Philosophy of the Absurd

Philosophy 255: Moral Psychology Albert Camus and his Philosophy of the Absurd Writer Albert Camus and his philosophy of the absurd present an interesting twist on moral psychology. Whereas classical Western philosophers such as Plato and Socrates argued a moral obligation to "the good life" and the existence of an absolute common human (moral) nature, Camus suggests that life is absurd, and in fact almost meaningless. The only meaning or value he gives to human life is the pure joy of living in a world with which man is connected. He rejects religious belief and existentialism, which in his view serve only to support and even glorify the irrational. He puts forth a moral psychology which involves accepting and even embracing the absurdity of one's life, and simply living one's time as fully and intensely as possible. Camus' s argument maintains that any course of action is acceptable, as long as one faces whatever consequences may follow. This philosophy, and his related works of both fiction and non-fiction, is intriguing in that it is radically different from classical moral psychology and ethics. In order to understand fully the implications of Camus's philosophy for "the good life," should there be one at all, one must systematically examine all of his writings. No single work can be said to contain the "gist" of Camus's idea; Camus worked his whole life on developing a constant theme - that of the absurd universe. ...read more.

In "Le Mythe de Sisyphe" Camus sought to "explore the manifold problems that people encounter in their daily lives." The "intellectual malady" that was a result of the contradiction between what man wants (immortality) and the fundamental truth of existence (the fact of death) concerned Camus greatly, and inspired him to investigate a reason for living. The essay begins with the basic and serious philosophic question of whether or not life is worth living. This, says Camus, is the "fundamental question of philosophy." He writes, "There is but one truly philosophical problem and that is suicide." He reasons that all one can know for certain is that he exists and the world exists, and that he is inescapably connected to the world. This, however, is no reason to live. It is merely the fact of life. Thus, Camus concludes that life has no absolute meaning, despite the natural human longing for such a meaning. Between this yearning for meaning and the actual condition of the universe there is a gap that cannot be filled with any reasonable explanation. This gap is the confrontation between the irrational and the truth - and therein lies the feeling of the absurd. Camus's next problem was to determine if thought is possible in an absurd existence. To do so, he looked to the writings of Jaspers, Lev Shestov, Soren Kierkegaard, and Edmund Husserl - all of whom had reached a similar recognition of an absurd universe. ...read more.

Under closer inspection, however, the argument for the absurd really emphasizes that the only absolute good is human life. Therefore it would be against this common, absolute good to destroy human life. Therein Camus finds his one moral absolute. In Camus's following, final works: "La Chute" (The Fall) and "L'Exil et le royaume" (Exile and the Kingdom), and the unfinished "Le Premier Homme" (The First Man), as well as his later theater works, he turns away from philosophy in favor of humans in real situations. The most notable trend in these works is the characters' freedom to choose and act in quest to find meaning in a world without god. They, like Sisyphus and Meursault, must also try to reconcile their desires with the unchanging natural fact of death, but are finally not bound by any philosophy at all. Camus's literary and philosophical work, can, of course, be analysed in simple terms in respect to moral psychology. What is emphasized as the best - and in fact only - way to live is to do so with the constant awareness of the finite nature of life, and therefore a heightened sensitivity to all the joy the world has to offer. The only moral code in the absurd world is a common regard for all of human life, for in the end that is the only thing that has value or meaning. ...read more.