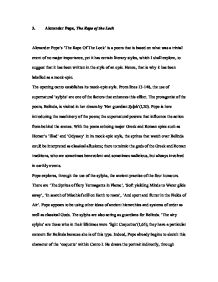 Alexender Pope's 'The Rape Of The Lock'

Alexander Pope’s ‘The Rape Of The Lock’ is a poem that is based on what was a trivial event of no major importance, yet it has certain literary styles, which I shall explore, to suggest that it has been written in the style of an epic. Hence, that is why it has been labelled as a mock-epic.

The opening canto establishes its mock-epic style. From lines 13-148, the use of supernatural ‘sylphs’ are one of the factors that enhances this effect. The protagonist of the poem, Belinda, is visited in her dream by ‘Her guardian Sylph’(I,20). Pope is here introducing the machinery of the poem; the supernatural powers that influence the action from behind the scenes. With the poem echoing major Greek and Roman epics such as Homer’s ‘Iliad’ and ‘Odyssey’ in its mock-epic style, the sprites that watch over Belinda could be interpreted as classical allusions; there to mimic the gods of the Greek and Roman traditions, who are sometimes benevolent and sometimes malicious, but always involved in earthly events.

Pope explores, through the use of the sylphs, the ancient practise of the four humours. There are ‘The Sprites of fiery Termagants in Flame’, ‘Soft yielding Minds to Water glide away’, ‘In search of Mischief still on Earth to roam’, ‘And sport and flutter in the Fields of Air’. Pope appears to be using other ideas of ancient hierarchies and systems of order as well as classical Gods. The sylphs are also acting as guardians for Belinda. ‘The airy sylphs’ are those who in their lifetimes were ‘light Coquettes’(I,65); they have a particular concern for Belinda because she is of this type. Indeed, Pope already begins to sketch this character of the ‘coquette’ within Canto I. He draws the portrait indirectly, through characteristics of the Sylphs rather than of Belinda herself. Pope writes ‘Her Joy in gilded Chariots, when alive, / And Love of Ombre, after Death survive’. ‘Her joy in gilded Chariots’ suggests an obsession with materialistic splendour, while ‘love of Ombre,’ a fashionable card game of the time, suggests frivolity. This is showing that the central concerns of woman hood, at least for women of Belinda's class, are social ones. Pope is taking his mock-epic and asserting a huge degree of humour because of the triviality of Belinda’s worries. According to John Barnard, ‘these are women who value above all the prospect marrying to advantage, and they have learned at an early age how to promote themselves and manipulate their suitors without compromising themselves’. The Sylphs become a sort of allegory for the mannered conventions that is expected of female social behaviour at the time. In Canto I line 78 Ariel, her ‘guardian sylph’, emphasises that ‘Honour is the word with men below’. Principles like ‘honour’ have become no more than another part of expected interaction within her social circle. These are principles that Belinda feels she loses later on in the poem when her lock of hair is cut.

Pope uses other mock-epic forms when Belinda is at her dressing table. We can see this through the use of mock-heroic motifs. For example, starting from ‘And now, unveil’d, the Toilet stands display’d’ (line 121) to ‘sacred rites of Pride’ (128). Here we see Belinda admiring herself in her dressing room mirror. This simple act is portrayed as an epic parody that is rendered as a religious sacrament, in which Belinda herself is the ‘Priestess’ and her image in the looking glass is the Goddess she worships with ‘sacred rites of Pride’. The status of the toilet is elevated to a sort of religious shrine, through the use of words such as ‘unveil’d’ and ‘stands display’d’. Also other words are used to imply the religious connotations in the extract, for example ‘mystic order’ (122), ‘rob’d in white’ (123), ‘Cosmetic pow’rs’ (124), ‘heavenly Image’ (125), ‘Th’inferior Priestess’ (127) and ‘alter’s side’ (127). The elevation of the status of such a simple, trivial task is typical of the theme of the poem, hence its mock-epic labelling. This is where Pope asserts the most humour into his poem. Metaphorically describing a toilet as a religious shrine is nothing short of ludicrous.

This parody of the religious rites is just before another kind of mock-epic scene, that of the ritualized ‘arming’ of Belinda, beginning from ‘Unnumber’d treasures’ (line 129) to ‘awful Beauty puts on all its arms.’ (line 139). Pope replaces weapons with items such as ‘combs’, ‘pins’ and on line 138, ‘Puffs, Powders, Patches, Bibles, Billet-doux.’ The ‘arming’ of Belinda is there to echo other epics, especially with its martial imagery. For example, in John Milton’s ‘Paradise Lost’, Satan arms himself with ‘his ponderous shield / Ethereal temper, massy, large and round’ (Paradise Lost, Book 1, Lines 284/285).

In lines 140-148, there suggestions that, while at her mirror, Belinda is born again, hence transforming her into the goddess she can see within the mirror. Pope does this by using verbs such as ‘puts on’, ‘rises’, ‘repairs’, ‘awakens’, ‘calls forth’, ‘arise’ and ‘quicken’.

The whole of the poem is without a doubt a mockery on the epic form, which in turn turns its subject matter into nothing but a mockery. The verse form of The Rape of the Lock is the heroic couplet. The heroic couplet consists of rhymed pairs of iambic pentameter lines.

Epic subject were traditionally grand. They told of subjects that had universal importance, such as the fall of Troy (‘The Iliad’), the founding of Rome (Virgil’s ‘The Aeneid’) or the loss of paradise (‘Paradise Lost’). They where also long; usually twelve books with hundreds of lines in each. They also covered a wide geographical area over a long period of time. ‘The Rape Of The Lock’, on the other hand is small by contrast. It is merely five canto’s, each consisting of a hundred and fifty or so lines. Geographically, we are taken on a quick journey down the Thames in London as opposed to a worldwide epic journey, and all the action happens within a space of a day. With all these facts, it is hard to believe that this has been classed as a mock-epic. Indeed, that it has anything to do with an epic. It is, of course, the language and techniques that Pope uses that creates the epic satire.

‘The Rape’ is written in a grand way; not dissimilar from the Latinate English Milton uses in his epic, ‘Paradise Lost’. Indeed, ‘Paradise Lost’ appears to be the basis for much of Pope’s mocking on the epic form. For example, in Book 1, line 6 of ‘Paradise Lost’, Milton writes ‘Sing heavenly Muse, that on that on that secret top’. In Canto I, line 3, Pope writes ‘I sing - This verse to Caryll, Muse! Is due:’. While Milton is evoking a ‘heavenly’ inspiration, Pope is mockingly evoking his human friend, ‘Caryll’. This sort of technique is preparing us as a reader to expect frivolity with the subject matter Pope is going to tackle. In this respect, it could be interpreted as Pope is being disrespectful to classic writers and the epic form. I believe the strategy of Pope's mock-epic is not to mock the form itself, but almost to mock his society in its very failure to rise to epic standards, exposing its ‘petty trifling’ by casting it against the grandeur of the traditional epic subjects and the bravery and courage of epic heroes, such as Achilles from ‘The Iliad’ or Odysseus from ‘The Odyssey’.  We can see an example of this in canto 4. The competition among the young lords for the attention of beautiful ladies is depicted as a battle of vanity, as ‘wigs with wigs, with sword-knots sword-knots strive.’ Pope uses synecdoche Pope's phrases here expose an absurd attention to exhibitions of pride and ostentation. He emphasizes the inanity of discriminating so closely between things and people that are essentially the same in all important (and even most unimportant) respects. Here we can see differences from a conventional epic. Traditionally, an epic is set in male orientated, public world, such as ‘The Iliad’. Here, we are beginning to see that this is set in a domestic, female world.

Another mock-epic element is the description of games and trivial quarrels in terms of warfare. The first example of this is a card game played by Belinda, in Canto 3 on line 46. The line reads ‘Let Spades be trumps! She said, and trumps they were.’ The line echoes Geneses 1:3, ‘God said ‘Let there be light’ and there was light’. This parodied version of the Bible quote sets up the initial connotations of mock-epic in this extract. The humour comes through the metaphorical inclinations of the game being treated like a battle. For example lines 61/62 read ‘Ev’n mighty Pam, that Kings and Queens overthrew / And mow’d down armies in the fights of Lu’. The use of words such as ‘mighty’, ‘Kings and Queens’, ‘overthrew’, ‘mow’d down’, ‘armies’, and ‘fights’ give the seemingly innocent game of trumps a huge degree of martial imagery.

Then, from line 147, the cutting of the lock, we get this sort of imagery again. Pope uses extravagant words, such as ‘glitt’ring’ to describe the scissors, and how they are used ‘T’inclose the lock’. The extravagant language used for such a simple deed echoes Pope’s intention of the poem; to expose the ‘petty trifling’ as stated in the quotation. Belinda’s over-dramatised reaction on lines 156/7, where she ‘screams of horror’ and ‘shrieks’ suggest a war cry on a battlefield, hence adding to the suggestion of a mock epic ‘battle’. When Belinda loses her lock of hair, she believes, as according to her sylph Ariel in Canto 1, she has lost her ‘honour’. The loss of honour is a flaw of most epic heroes.

‘The Rape Of The Lock’ is nothing short of a 18th Century spoof; it has taken an ancient form, and turned it into a mocking style to portray the sheer triviality of a truly trivial situation. Therefore I believe Pope is  not mocking the epic-form, nor the epic poets.