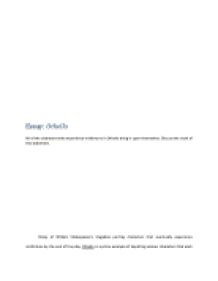 All of the characters who experience misfortune in Othello bring it upon themselves. Discuss the truth of this statement

﻿Essay: Othello All of the characters who experience misfortune in Othello bring it upon themselves. Discuss the truth of this statement. Many of William Shakespeare?s tragedies portray characters that eventually experience misfortune by the end of the play. Othello is a prime example of depicting various characters that each come to their own downfall because of a critical weakness. In the play, Othello?s mislead insecurities in his wife?s love for him, Roderigo?s foolish trusting nature, and Desdemona?s submissive naivety all illustrate Shakespeare?s usage of a critical weakness in creating each character?s own downfall. Othello, who slowly becomes increasingly jealous of Cassio, begins to reveal his key weakness of being mislead to insecurity in his innocent wife?s love for him. Scene 3 of Act 3 is crucial as it outwardly reveals the slow but important transition of Othello?s peaceful state to one of constant insecurity, shown through the short and direct dialogue given by Othello. In the previous acts, he would rarely ask such questions; he would openly display his thoughts. However, it becomes clear that he starts to respond much differently. He starts to demand Iago many direct questions such as, ?Was not that Cassio parted from my wife?? (3.3.38), and, ?Why of thy thought, Iago?? (3.3.108). These regard the touchy circumstance of Cassio?s apparent affair. Near the beginning of the play, despite saying that he is rude in his speech, Othello speaks convincingly about how he won Desdemona over his stories. ...read more.

In the first few lines of the play, Roderigo complains, ?I take it much unkindly/ That thou Iago, who has had my purse/ As if the string were thine, shouldst know of this.? (1.1.1-3) Immediately it is known that Roderigo has given Iago full control of his money and that he is resentfully complaining, yet doing nothing about it. Roderigo has been manipulated by Iago in that he freely provided him with money, hoping to get with Desdemona. Roderigo, being the only one who knows of Iago?s sinful plans, does not act upon it; in fact he helps Iago achieve his malevolent wants, simply because of his foolish desire for Desdemona. As Iago assures Roderigo not to give up on the brilliant plan, Roderigo easily becomes convinced just by the thought of getting to be with Desdemona. He even goes as far as saying, ?I?ll sell all my land.? (1.3.384), showing the trust he has in Iago, and the extremes he is willing to go to. It merely proves how easily he comes to his downfall, simply by blindly trusting him without rationalizing upon it, and in the end he is murdered by the only man he ever trusted, Iago. Roderigo?s lack of independent determination is also shown previously as he has failed to become a successful suitor to Desdemona, wherein contrast, Othello was able to make Desdemona fall in love with him. ...read more.

Instead of sorting things out with her husband, she simply starts to show a passive nature. It seemed as if she knew her death was to come as she tells Emilia a few scenes before the death scene, “If I do die before thee, prithee shroud me…” (4.3.26). Even on her death bed, when Othello enforces that she is about to die, she tries, but with weakness to not kill her. Finally, she admits defeat and in a way accepts her defeat by saying, “Then Lord have mercy on me!” (5.2.60). Even her final words manifest her unconditional love for Othello and she takes the entire misunderstanding upon herself. Thusly her submissive nature and her naïve notions imprudently brought her downfall, and her death. Each of the three characters who brought their imminent downfalls on themselves was triggered by their crucial weaknesses. Othello, who had an open mind to being mislead into developing treacherous insecurities in his wife’s love met his downfall by firstly killing his wife, then himself. Roderigo, a foolish natured suitor for Desdemona, blindly put his trust in Iago to such an extent that he caused his own murder by Iago himself. Lastly, Desdemona, submissive in character and naïve in thought, allowed herself to fall into Othello’s vehemence, allowing him to strangle her in her own wedding sheets. All of these characters, having an identified weakness in character, all met with their misfortunate downfalls by the end of the play, supporting the very nature of this tragic story, Othello. ...read more.

A very strong analytical essay that explores characters in depth and in detail.
To strengthen the piece it would be advisable to look at other possibilities in more detail. The character of Iago is explored. However I think there is more to say about the influence he has over all of the characters and how Shakespeare uses him to control the fate of the characters.