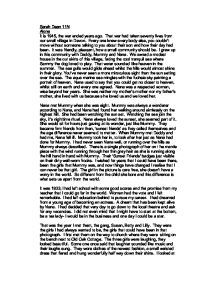 Sarah Dean 11N Alone It is 1945, the war ended years ago. That war had taken seventy lives from our small village in Devon. Every one knew every body else, you couldn't move without someone talking to you about their son and how their day had been. It was friendly, pleasant, how a small community should be. I grew up in this community with Daddy, Mummy and Nana. We owned a modest house in the out skirts of this village, facing the cool tranquil sea where Sammy the dog loved to play. That water sounded like heaven in the summer. The sea gulls would glide ahead whilst the hills would almost shine in their glory. You've never seen a more miraculous sight than the sun setting over the sea. The aqua marine sea mingles with the fuchsia sky painting a portrait of heaven. Nana used to say that you could get no closer to heaven, whilst still on earth and every one agreed. Nana was a respected woman, wise beyond her years. She was neither my mother's mother nor my father's mother, she lived with us because she loved us and we loved her. Nana met Mummy when she was eight. Mummy was always a wonderer according to Nana, and Nana had found her walking around aimlessly on the highest hill. She had been watching the sun set. Watching the sea join the sky, it's nighttime ritual. Nana always loved the sunset, she seemed part of it. She would sit for hours just gazing at its wonder, just like Mummy. They became firm friends from then, 'sunset friends' as they called themselves and the age difference never seemed to matter. When Mummy met Daddy and had me, Nana fell ill. ...read more.

I believed that life could get no better. We paddled along the sea in the morning, shopped in the day and watched the sun set at night. It never became tedious, it was just girls, women having fun together. The day that changed my life forever was all down to Susan. She had heard about a valentine's dance, which was to be held in the village hall. We spent the day looking for dresses and playing with Susan's make up. I found a dress that was sunset red and matched my auburn hair. It fitted my figure perfectly and Susan by the magic of make up and beauty techniques turned me into a young woman. We approached the hall nervously and tottered gingerly in with our high-heeled shoes. Susan turned many of the men's heads by passing by them with her expensive perfume. We danced as a four and began to forget about the glaring men in the corner. As the music on the gramophone turned to a slow song, the girls were taken to dance. I was left to dance by myself in the corner, looking utterly ridiculous. A young man with a beige shirt finally approached me. He had sandy blonde hair and looked just like the picture of my grandfather that Daddy gave me. We danced whilst I struggled on my heels. He seemed to find it hilarious that I could not possibly dance on these shoes. A new record was put on the gramophone, a real brass band dance number and Alfie, his name as I discovered, was found to be a horrendous dancer just like me. ...read more.

She got hold of a magazine with pictures of actresses. She declared that she wanted to act on the stage. She had the dreams that I had when I was younger. I of course told her about her father, told her of everything that we did together, the fun we had. I told her about Susan and Betty and Lilly and of course Nana. I showed her the photo of us when we were playing on the hill, by the sunset. I showed her the sunset each night, like a ritual. We would go up there and she would wave to the passing planes, hoping they were daddy and he would wave back. With six years passing I have now realised that there is no hope. The war may have ended but the suffering hasn't. There are many women in the village without partners, without their sweet hearts, me being one of them. I keep thinking of my Alfie, lying amongst thousands of men in their shallow graves, facing towards the heavens. The sunset tonight is pale, pathetic almost as if all hope has gone. Nana always used to say that hope has never gone but I can see my daughter is without a father. She still to this day waves at passing planes- she has hope and dreams that I lost long ago. I look back at the picture of me and Betty and Susan thinking of my youth. I was happy then, I was with friends. Through them I had my lover and my child. As she grows up, she grows away from me, becoming a teenager, rebelling against society and me. She has made her own friends who she sits of the bench with, laughing at passers by. As I look up to the sunset I realise that I am alone. ...read more.