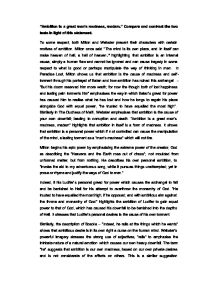 "Ambition is a great man's madness, madam." Compare and contrast the two texts in light of this statement. To some respect, both Milton and Webster present their characters with certain motives of ambition. Milton once said "The mind is its own place, and in itself can make heaven of hell, a hell of heaven." highlighting that ambition is an internal cause, simply a human flaw and cannot be ignored and can cause tragedy in some respect to what is good or perhaps manipulate the way of thinking in men. In Paradise Lost, Milton shows us that ambition is the cause of madness and self-torment through his portrayal of Satan and how ambition has ruined this archangel - "But his doom reserved him more wrath; for now the though both of lost happiness and lasting pain torments him" emphasises the way in which Satan's greed for power has caused him to realise what he has lost and how he longs to regain his place alongside God with equal power, "he trusted to have equalled the most high". Similarly in The Duchess of Malfi, Webster emphasises that ambition is the cause of your own downfall; leading to corruption and death. "Ambition is a great man's madness, madam" highlights that ambition in itself is a form of madness. It shows that ambition is a personal power which if not controlled can cause the manipulation of the mind, a lasting torment as a "man's madness" which will not tire. ...read more.

of his sister in which he realises how his desire has caused tragedy in not only his own life; but also in everyone around him. Bosola has been sent "to live in the court here and observe the Duchess, to note all peculiars of her behaviour." as an observer for Ferdinand in order to have control over his sister. Having eventually caused the death of his sister through her brothers' attempts to stop her from remarrying, it is clear that the curse of ambition causes the mind to react strangely and repent your actions, after being blinded by greed and personal desire; in this instance, ownership of the Duchess. Ferdinand is shown to have become entranced by his own image and has grown mad with it, caused by his own ambition - "look, what's that follows me?" Satan, although he repents his actions is still driven to conquer God's power as he is believed that God was simply born into power and does not therefore make him the great leader. This aspires Satan and has led to the growth of his ambition to become the mighty leader of Hell. He has taken his ambition and is using the falling rebel angels as the poisoned darts as weaponry against God. It is Satan's belief in his own achievement to have been the founder of Hell that he can become a mighty leader to rebel and eventually become just as powerful as God - "All is not lost, the unconquerable will and study of revenge; immortal hate and courage never to submit and yield." ...read more.

In Paradise Lost, Milton has explained that Satan's desire has become his own downfall; imprisoned for eternity with the inability to regain freedom. It is with this entrapment and physical containment which has caused Satan's own personal regret and maddening of the mind, "vaunting aloud and racked with deep despair". It is shown that Satan's continuity is also a lead to his downfall, being unable to see his flaw; forever feeling he is capable of overthrowing God of his seat and forever being disappointed. In The Duchess of Malfi, we have also seen that ambition is the cost of another man's downfall. We can see that ambition is not only the cause of eternal suffering for yourself, but is the tragedy of others before you before you can realise your own actions. Webster shows how madness is derived from ambition - "that's the greatest torture souls feel in Hell: In Hell they must live and cannot die". He shows how madness is overtaken of the soul, being unable to rest as ambition is the sole driver for constant succession and greed. However, Webster shows that ambition is a "great man's madness"; but is not necessarily affecting everyone in the same way. Although madness is the cause created from an ambitious nature, Webster shows us that "in Hell, there is one material fire; and yet it shall not burn all men alike." Here, Webster describes that ambition can affect people in many ways; but in turn leads to madness and the suffering of your own actions. ...read more.