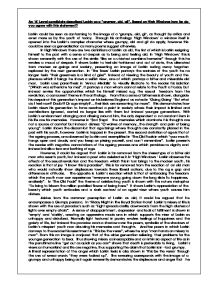 An 'A' Level candidate described Larkin as a &quot;grumpy, old, git&quot;. Based on High Windows how far do you agree with this statement?

An 'A' Level candidate described Larkin as a "grumpy, old, git". Based on High Windows how far do you agree with this statement? Larkin could be seen as conforming to the image of a 'grumpy, old, git', as thought by critics and even more so by the youth of today. Through his anthology 'High Windows' a window itself is opened into the Larkin's complex character where grumpy, old and git do apply, however this could be seen as generalisation as many poems suggest otherwise. In High Windows there are two definitions of Larkin as old, the first of which is Larkin resigning himself to the past with a sense of despair as to being and feeling old. In 'High Windows' this is shown reverently with the use of the simile "like an outdated combine harvester" through this he evokes a mood of despair. It shows Larkin to feel old-fashioned and out of date, thus alienated from modern on-goings and society, presenting an image of Larkin rusting away forgotten replaced by the next generation. In 'The Trees' Larkin portrays the sadness at the youth he no longer feels "their greenness is a kind of grief". Instead of viewing the beauty of youth and the pleasure which it brings he shows a selfish view, one of which portrays a bitter and miserable old man. Larkin uses parenthesis in 'Annus Mirabilis' to visually illustrate to the reader his isolation "(Which was rather late for me)". ...read more.

Another poem in which Larkin conveys to the reader his resentment is "This be the verse", where he says "man hands on misery to man". From this an image is conjured that of the older generation relieving their problems for the younger generation to bear. Thus showing misery as inescapable and an intrinsic aspect of life as in the penultimate line "get out as quick as you can" shows that death is preferable to living. Larkin's views on humankind and life are negative, thus supporting the claim that Larkin is in-fact grumpy. A literal representation of the anger which Larkin feels is also shown in 'This be the verse' through the use of swear words "they were fucked up". The swearing corresponds with the image of a grumpy and unhappy being as it again reverently demonstrates the displeasure and anger that he feels. Another of Larkin's traits is his ability to counteract a celebratory or positive thing with a negative as seen in 'Show Saturday', "Grey day for the Show" and "The wrestling starts, late". It shows Larkin to view happy things such as show where it is a day of relaxation and fun, to instead supply endless disappointment and an anti-climax. If Larkin was not in fact grumpy, he would cast a positive instead of a negative spin on what he sees and writes about however this is not the case in the majority of the anthology. ...read more.

Larkin uses vivid imagery such as "the small hushed waves' repeated fresh collapse up the warm yellow sand", its effect is to present the reader with a beautiful picture and positive connotations. Causing them to relate back to their own memories of seaside visits, thus relating with the reader on a personal level and so far removed from an antisocial image of Larkin as a 'git'. In 'Dublinesque' Larkin casts a positive spin over a somewhat depressing theme of a funeral, he rejects a pessimistic approach but instead favours optimism with "there is an air of great friendliness". His positive attitude is illustrated in the final line where he leaves the reader with an emotional and lasting statement "all love, all beauty". Therefore impacting upon the reader and removing himself from a stereotypical view of funerals having a macabre atmosphere. In 'The trees' lyrical language dominates "yet still the unresting castles thresh in fullgrown thickness every May". This language has connotations of romance, love and optimism it shows a pleasant side to Larkin far removed from a git. The reasoning for Larkin as 'grumpy, old, git' could stem from a misunderstanding of his poems realistic approach to life, and not solely because of the anthology's somewhat pessimistic tone. However it is true to say that there is a concurrent and underlying theme of dissatisfaction, lack of opportunities and a misspent youth. Therefore it is justifiable to call Larkin a 'grumpy, old, git' to a certain extent. ...read more.

This essay chooses appropriate texts from High Windows and quotes telling extracts from them but it sometimes takes phrases out of context to support its arguments and is inclined to use sweeping generalizations to represent others' views.