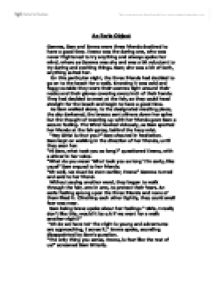 An Eerie Object Gemma, Sam and Emma were three friends destined to have a good time. Emma was the daring one, who was never frightened to try anything and always spoke her mind, where as Gemma was shy and was a bit reluctant to try daring and exciting things. Sam; she was a bit of both, anything suited her. On this particular night, the three friends had decided to go on to the beach for a walk. Knowing it was cold and foggy outside they wore their scarves tight around their necks and their gloves covering every inch of their hands. They had decided to meet at the fair, so they could head straight for the beach and begin to have a good time. As Sam walked alone, to the designated meeting place, the sky darkened, the breeze sent shivers down her spine but the thought of meeting up with her friends gave Sam a secure feeling. The Wind howled viciously, as Sam spotted her friends at the fair gates, behind the hazy mist. "Hey Girls! Is that you?" Sam shouted in hesitation. ...read more.

The Beach was now in front of the girls; it's golden grains of sand being thrown around by the vicious wind. Unlinking their arms, they all sat down on the edge of the sand and proceeded to take their socks and shoes off; so they could feel the golden sand beneath their feet. "Come on girls, this is where our adventure beings" Emma signalled for the girls to follow her. Gemma and Sam couldn't believe what they had let themselves in for, Emma wasn't one for little adventures, they always had to be big where she was concerned. Traipsing behind, Gemma and Sam were bored, already! "Arghhhhh!" Emma screamed at the top of her voice. "Emma, Emma, are you aright?" Shouted Emma's friends as they ran over to where she was situated. As Gemma and Sam approached Emma she was slumped on the sand with her head down, laughing uncontrollably. As she lifted her head up, her laughter turned into seriousness and the smile was wiped from her, as the look on Gemma and Sam's faces wasn't one Emma would want to mess with. ...read more.

Agreeing to the idea of burying it, Gemma and Emma knelt down and the three friends began to dig a hole to put the star-shaped object in. Ten minutes later, the sky had got darker and the hole was now deep enough for the object. Emma, being brave, stood up and kicked the object into the hole. It fell to the bottom and then girls wearily filled the hole with sand. "Phew, I'm glad that is over, Can we just go straight home now?" Sam sighed with relief and wanted so badly to go home, where she would be safe. "Come on let's go" Emma said, as she pulled Sam up from her kneeling position. "Ouch, be careful, my hands are still sore!" Sam moaned at Emma. Once again they were arm in arm and they started their journey home. "I hope our next adventure is not as painful as this one" Sam laughed. "And I think we should make a promise to stay together at all times and never to tell anyone about 'The Object' "Emma suggested with a smile. "We promise we won't leave you Emma and Promise we won't tell" Gemma and Sam promised, in a 'forgive us please tone'. When they reached the fair gates, they said their goodbyes and wished each other a safe journey home. ...read more.