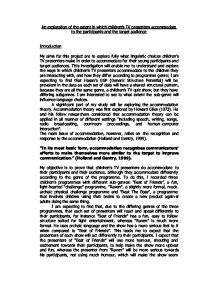 An exploration of the extent in which childrens TV presenters accommodate to the participants and the target audience.

An exploration of the extent in which children's TV presenters accommodate to the participants and the target audience Introduction My aims for this project are to explore fully what linguistic choices children's TV presenters make in order to accommodate for their young participants and target audiences. This investigation will enable me to understand and explore the ways in which children's TV presenters accommodate to the children they are interacting with, and how they differ according to programme genre; I am expecting to find that Hasan's GSP (Generic Structure Potential) will be prevalent in the data as each set of data will have a shared structural pattern, because they are all the same genre, a children's TV quiz show, but they have differing subgenres. I am interested to see to what extent the sub-genre will influence language choices. A significant part of my study will be exploring the accommodation theory. Accommodation theory was first explored by Howard Giles (1973). He and his fellow researchers considered that accommodation theory can be applied in all manner of different settings "including speech, writing, songs, radio broadcasting, courtroom proceedings, and human-computer interaction". The main issue of accommodation, however, relies on the recognition and response to the accommodation (Holland and Gentry, 1999). "In its most basic form, accommodation recognizes communicators' efforts to make themselves more similar to the target to improve communication." (Holland and Gentry, 1999). My objective is to prove that children's TV presenters do accommodate to their participants and their audience, although they accommodate differently according to the genre of the programme. To do this, I recorded three children's programmes with different sub-genres: "Best of Friends", a fun, light-hearted "challenge" programme, "Raven", a slightly more formal, mock-archaic physical challenge programme and "Beat The Boss", a programme that involves children using their brains to create a new product against adults doing the same thing. I am expecting to find that, due to the differing genres of the three programmes, that each set of presenters will react and speak ...read more.

to mitigate failure, for humour purposes. There are examples of rehearsed songs for humorous effect: "We rule, we're cool, we are the Best of Friends!" In additional sections of the show, it shows the presenters failing at the tasks the participants succeeded at and allowing the participants to try an Indian head massage on the presenter without their knowledge, again for humour and for the benefit of the audience and the participants. There is also quite a bit of praise used towards the participants, especially when doing tasks: "Congratulations!", "Excellent stuff!" and "well done!" The presenters also encourage the children by getting them to clap and cheer when they have succeeded, perhaps to make them feel more secure and confident in the TV situation. In Raven there is much less humour used than in Best of Friends, probably due to the GSP of the show and the genre of the show. The lack of humour is due to the formal, archaic format of the show and this helps put forward the "challenge" aspect of the game. However, Raven uses a lot of praise when talking about his contestants: "Wenra, Kinsa, Dejan, you certainly work well together as a team" and "Wenra has shown great promise from the beginning". This is done to help reassure the contestants and to encourage them as they are faced with quite a formal situation and have to try and understand the archaic language he uses, therefore the praise helps them deal with the situation. Beat the Boss is a complete opposite to both Best of Friends and Raven in the sense that it has more humour and almost no praise used towards the contestants. The humour is projected in the form of "puns" such as "dive into this watery challenge" and "a brand new pool play product that will create a splash with your mates!" which is mainly for the audience's benefit rather than the contestants'. ...read more.

same genre (children's TV quiz show), with the Best of Friends presenters using a lot of laughter and jokes with their participants, the Raven presenter talking to his participants in an adult, formal, archaic tone and the Beat the Boss presenter barely interacting with the participants at all. Each of the shows' presenters are accommodating to a multiple audience, namely the TV audience and the participants, and each show balanced the accommodation between audience and participants differently: Best of Friends accommodated equally to both TV audience and participants, Raven tended to accommodate to both, albeit a very small amount and the Beat the Boss presenter tended to accommodate more to the audience than her participants. The need to consider the multiple audiences often affected the amount of accommodation. I found little similarity between how much accommodation each presenter of each show gives, which may be to do with the differing sub-genres of each show affecting how much accommodation was used. Evaluation Overall, I think that the question I asked was valid, and I think I answered my question and hypothesis quite well, I found sufficient evidence that the TV presenters do accommodate to their participants, although the genre of the show changed how the presenters acted, and in turn changed how much accommodation was shown to the participants. If I were to do the project again, I would probably extend the amount of shows I studied, so I could get a wider spectrum of results, and I would eliminate the gender variable (either use all male or all female presenters), instead of having a mixed gender presenter group. This would help me get a more secure answer to my question. I would perhaps also try and find episodes where there were all girl or all boy participants, although this may prove too difficult. Having said that, I still feel that I completed my question to the best of my ability, and I feel I got a good, solid, and conclusive answer to my question. ...read more.