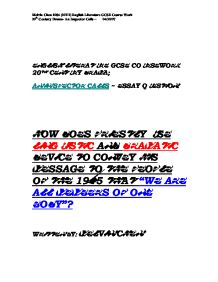 An In Spector Calls - How does Priestly use linguistic and dramatic device to convey his message to the people of 1945 that 'we are all members of one body'?

ENGLISH LITERATURE GCSE COURSEWORK 20TH CENTURY DRAMA; AN IN SPECTOR CALLS ~ ESSAY QUESTION: HOW DOES PRIESTLY USE LINGUISTIC AND DRAMATIC DEVICE TO CONVEY HIS MESSAGE TO THE PEOPLE OF THE 1945 THAT "WE ARE ALL MEMBERS OF ONE BODY"? WRITTEN BY: MELVIN CHEN During the war torn era following the harrowing affairs of the Second World War, a huge diversion upon public thinking took place. People began to adjust their attitudes surrounding the idea of community and society. This dramatic revolution upon public state of mind can be strongly associated to the way in which the war had affected the British people. Undoubtedly, and inevitably, the war took a profound toll upon the deep-seated class divisions of the time. It acted as an attractive force, pulling individuals together to form a closely linked community with with no class barriers to divide people. Everyone had to work, and fight side by side; none was 'better' than anyone else was. When the conflict ended in 1945, many people had finally realized the unfairness and poverty within society and were more willing to mix freely between classes. Even in theatres, there was a much wider audience involving people of all classes and even including the young. The British citizens were preparing for another general election in 1945. This time, though, a new socialist image was starting to emerge, gathering formidable public support. Supporters were beginning to build up confidence and a running hope for a revolutionary Socialist government to re-unite their country. One person who helped to build up, and expand, upon this socialist revolution was J.B priestly. Priestly was, himself, a strong believer in the importance of community. ...read more.

A ghoul is a spirit which takes fresh life from corpses, we could certainly argue that the inspectors' existence is as a result of the girls' death. The way in which the inspector is portrayed and acted also suggests that he be of an inhuman nature. This is manifest in the inspectors, often, assertive and derogatory attitude towards the Birlings' -'disconcerting habit to look hard at the person he addresses before speaking' (p11). The inspectors' dramatic entrance and exit also help to characterize an omnipotent and inhuman eminence. Priestly imbues the inspector with this, almost, ghostly peculiarity to encourage the audience to think of him as being either; an avenging angle, a time traveler, a benevolent ghost or a collective conscience. In my opinion, a collective conscience most effectively conveys Priestlys message because a conscience is representative of a motive for change. Despite this, the impression created is entirely dependent upon the intent of the acted play. Priestlys' portrayal of the inspector as being an illusive anima is a central and crucial conveyer device in the play, allowing his message of community to hit the audience with elevated impact and effectiveness. Priestly uses Mr. Birlings' exaggerated, portentous personality, imperviousness and ignorance, to represent the stereotypical capitalist restrictions of the time. This is obvious from the way that he speaks, for example he boasts -"we don't guess - we've had experience we know." Birling says this, directly, after making two complete misinterpreted predictions about "peace by 1940" and about the "unsinkable titanic" (p7). Here, we see priestly using dramatic irony to mock the narrow mindedness of the capitalism, portrayed within Birling. ...read more.

This final speech by the inspector is the highlight of the whole play and sums up Priestlys message vividly and productively so that it sticks, firmly, to the minds of the audience. The last two dramatic moments are the realization after ringing the police chief that there is no inspector Goole, and then everyone becomes completely baffled just after recovering believing it was a hoax, there's a final dramatic phone call. The phone rings and everyone learns that a girl has just died on her way to the infirmary after committing suicide by drinking disinfectant. The ending of the play comes full circle as if the whole thing starts over again. This is another impressive dramatic tactic used by priestly to re-emphasize the inspectors final speech proposing that; if men will not understand the importance of community, then they will be "taught" it over and over again until they do. Finally, Priestly keeps the play unclosed, leaving the audience to think about the messages that it conveys and to draw their own conclusions. This unclosed end to the play is used by Priestly to allow the audience to reflect upon the meaning of the play and, hopefully, to realize those aspects of their life should be changed for the good of humanity. An Inspector Calls uses many, if not all of the essentials for a detective story. The interrogation is the central part to the whole play, used to develop the plot and keep the story running. It creates the effects required of a detective story whilst using dramatic and linguistic devices to convey a valuable message to the audience. Priestlys' combination of reality and the extraordinary is ingenious and he uses valuable theories to help craft the detective story convention. Melvin Chen 10S4 (10Y1) English Literature GCSE Course Work 20th Century Drama- An Inspector Calls ~ 04/30/07 ...read more.