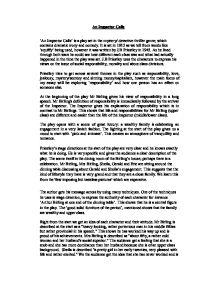 An Inspector Calls 'An Inspector Calls' is a play set in the mystery/ detective thriller genre; which contains dramatic irony and comedy. It is set in 1912 as we tell from words like 'squiffy' being used, however it was written by J.B Priestley in 1945. As he lived through both wars he could see how different each class was and what had actually happened in the time the play was set. J.B Priestley uses the characters to express his views on the issue of social responsibility, morality and about class divisions. Priestley tries to get across several themes in the play such as responsibility, love, jealousy, mystery/secrecy and sinning money/capitalism, however the main focus of my essay will be exploring 'responsibility' and how one person has an effect on someone else. At the beginning of the play Mr Birling gives his view of responsibility in a long speech. Mr Birling's definition of responsibility is immediately followed by the arrival of the Inspector. The Inspector gives his explanation of responsibility which is in contrast to Mr Birlings. This shows that life and responsibilities for Mr Birling (upper class) are different and easier than the life of the inspector (middle/lower class). ...read more.

to impress the Inspector with his local standing and his influential friends. However, he is aware of people who are his social superiors, which is why he shows off about the port to Gerald, "it's exactly the same port your father gets." He is proud that he is likely to be knighted, as that would move him even higher in social circles. He claims the party "is one of the happiest nights of my life." This is not only because Sheila will be happy, but because a merger with Crofts Limited will be good for his business. We the audience get an impression that Birling only cares about money 'for lower costs and higher prices'. We sense that he is a horrible man which only cares about himself. Mr Birling mentions in his speech 'the Titanic- she sails next week- forty- six thousand, eight hundred tons... New York in five days- and every luxury- and unsinkable, absolutely unsinkable.' And later he mentions 'a few German officers talking nonsense and a few scaremonger here making a fuss about nothing.' He is talking about the war, that he seems sure will never happen. This is dramatic irony because the audience know the Titanic sunk and war did happen. ...read more.

In a way this makes the audience forgive Sheila for what she has done. She is also perceptive of what is going on, and realises that Gerald knew Daisy Renton from the moment the Inspector mentioned her name. She also knows that the inspector knowledge of the past could be dangerous, 'he knows, he knows everything'. At the end of act 2 she is the first to realise Eric's part in the story. She is angry with her parents in act 3 for trying to 'to pretend that nothing much has happened.' Sheila says 'it frightens me the way you talk', she cannot understand how they cannot have learnt from the evening in the same way she has. This also show that the younger generation (Sheila and Eric) feel guilty for what they have done whereas the older generation are still in denial and are thinking of how to cover it up. Our image of Sheila has changed by the end of the play. At first we predicted she would be a stuck up and rather stupid daddy's girl however by the end of the play our image of her changed completely. The audience now see Sheila as an intelligent and good character in the play, which is a contrast of her father. ...read more.