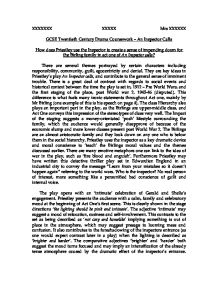 XXXXXXX XXXXX Mrs XXXXXX GCSE Twentieth Century Drama Coursework - An Inspector Calls How does Priestley use the Inspector to create a sense of impending doom for the Birling family in act one of An Inspector calls? There are several themes portrayed by certain characters including responsibility, community, guilt, egocentricity and denial. They are key ideas in Priestley's play An Inspector calls, and contribute to the general sense of imminent trouble. There is a great deal of contrast with regards to social events and historical context between the time the play is set in, 1912 - Pre World Wars, and the first staging of the place, post World war 2, 1945-46 (disputed). This difference is what fuels many ironic statements throughout Act one, mainly by Mr Birling (one example of this is his speech on page 4). The class Hierarchy also plays an important part in the play, as the Birlings are upper-middle class, and Act One conveys this impression of the stereotypes of class very well. The Impact of the staging suggests a money-orientated 'posh' lifestyle surrounding the family, which the audience would generally disapprove of because of the economic slump and more lower classes present post World War 2. The Birlings are an almost aristocratic family and they look down on any one who is below them in the social hierarchy. ...read more.

His first words are 'Mr Birling?' simply inquiring to if it is Mr Birling he is talking to. This may imply the inspector wants to cut to the chase and start the inquiry, to the annoyance of Mr Birling, as he wants to butter him up and get it over with. It may also show that the main reason the inspector is here is Mr Birling, and he may directly implicate Mr Birling just by asking a simple question, even though we know that is not true later on in the Act, the audience is still unaware. This adds to the uneasy, nervous atmosphere caused by his entrance. The stage directions clearly intensifies the mentality and superiority of the Inspector, as he ''creates at once an impression of massiveness, solidity, and purposefulness'. The sense of anxiety, interest and uneasiness rises at the sudden impact of a police inspector's entrance, just spelling trouble, and the fact that it is late at night implies deep trouble for the Birlings and Gerald. Moreover, the inspector makes the family ask him questions rather than the other way around (as one might expect with an inspector, as that is his job, to ask questions) and he intentionally withholds details and information from the family to use their curiosity to implicate themselves. ...read more.

He wanted to express his beliefs through a character. So he created the inspector as his image to convey his scepticism and criticism toward anti-socialist upper-class arrogance represented by the Birlings. Priestley's use of the inspector as a dramatic device and Sheila's representation of the audience promoted and got across his views throughout the play and especially in Act One. He created the sense of doom for the Birlings to show what happens to such attitudes represented by the family, because as we know, the war would have had a devastating impact on them. The mood of the act started out intimate and casual and slowly evolved to tense and disquieting because of the inspector's interrogation and even by him simply being there. What J. B. Priestley wanted to tell the audience through the play and through the inspector was '...One Eva Smith has gone - but there are millions and millions of Eva Smiths and John Smith still left with us...We don't live alone. We are members of one body. We are responsible for each other.' I didn't much like the play, but I did enjoy the subtleties and casual metaphors that made me think. To conclude, I think it is a piece of literature that was significant at the time, though I think a different piece which would've evoked more interest would've been a better choice to analyze. I hope you enjoyed reading it more than I've enjoyed writing it. ...read more.