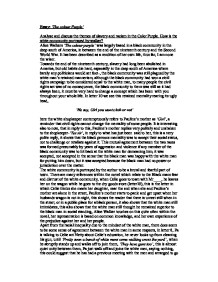 Analyse and discuss the themes of slavery and racism in the Color Purple. How is the white community portrayed by walker?

Essay: 'The colour Purple' Analyse and discuss the themes of slavery and racism in the Color Purple. How is the white community portrayed by walker? Alice Walkers 'The colour purple' was largely based in a black community in the deep south of America, in between the end of the nineteenth century and the Second World War. It has been described as a rendition of her own life, thus far, I am none the wiser. Towards the end of the nineteenth century, slavery had long been abolished in America, but old habits die hard, especially in the deep south of America-where barely any politicians would set foot-, the black community was still plagued by the white man's retained mannerism, although the black community had won a civil rights campaign to be considered equal to the white man, to many people the civil rights act was of no consequence, the black community to them was still as it had always been, it must be very hard to change a concept which has been with you throughout your whole life. In letter 10 we see this retained mentality rearing its ugly head, 'He say, Girl you want cloth or not' here the white shopkeeper contemptuously refers to Pauline's mother as 'Girl', a reminder that civil rights cannot change the mentality of some people. It is interesting also to note, that in reply to this, Pauline's mother replies very politely and unshaken to the shopkeeper-'Yes ...read more.

have guns too', this is almost quiet unity between them, Pa just walk off and joins the white men, saying nothing, this could suggest that he has had a previous meeting with the men and arranged to go shooting with them. This raises an interesting point, because earlier on, Pa gets mobbed because his business was a threat to his white rivals, either he regained his trust in the white man, or this was a separate group, and he has made friends enough with them to go shooting with them. Slavery is a big issue in 'The Color Purple', Celie, the heroine of the novel is proof enough that slavery was still alive back in the date; she was enslaved by her family and by her own community. The evidence that shows she was a slave in her own home is written all over the novel. The theory of slavery also incorporates ownership; the way in which Celie's father treats her is symbolic of ownership. When Mr _____ comes for Netty wanting to take her away and marry her, Celie's father doesn't let him, and in turn offers him Celie. When Celie's father introduces Mr____ to Celie, he is up on his horse; this suggests that he is higher and more important than her. Celie's father orders her to turn around so that Mr ____ can get a better look at her; also Celie's father adds to the offer, he offers a cow with her as an addition to the fobbing off of his daughter. ...read more.

she doesn't know any better, she has no knowledge of what a 'normal life' entails, and she cannot prove herself because she simply hasn't the vocabulary-or the knowledge to do so. In conclusion, from the first 25 letter in the novel, the goings-on within the black community are very scary, not only are the individual members of the black community at risk from the white folk, not a deadly risk-but still a substantial risk, but they were at risk from each other. The hostility they endure from the white folk appears to have rubbed off on the black community, staining their mannerisms and creating hostility among them. The white community is portrayed by Walker to be frightening and hostile, but with the way that families were run in those days, the families were too, frightening and hostile. Slavery was also rife within the black community, although the trade had been abolished; it was hard to wipe the minds of the past slaves and their descendants of what was morally correct, and what was not. Racism, though long gone in a political sense, was still strong within communities of white and black people, black people were still prejudiced against for their colour, they were given a lot less respect than they were entitled to, Shug Avery within the novel acts as a role model for the black community, showing them that it is possible to make it the world of the white man. ...read more.