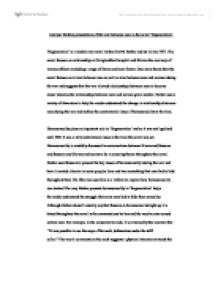 Analyse Barkers presentation of the love between men in the novel Regeneration.

Analyse Barkers presentation of the love between men in the novel 'Regeneration'. 'Regeneration' is a modern war novel written by Pat Barker and set in late 1917. The novel focuses on relationships at Craiglockhart hospital and follows the recovery of various officers including a range of fiction and non-fiction. One main theme that the novel focuses on is love between men as well as love between men and women during the war and suggests that the war allowed relationships between men to become closer whereas the relationships between men and women grew weaker. Barker uses a variety of characters to help the reader understand the change in relationships between men during the war and tackles the controversial issue of homosexuality at the time. Homosexuality plays an important role in 'Regeneration' and as it was not legalised until 1967 it was a very controversial issue at the time the novel was set. Homosexuality is candidly discussed in conversations between Rivers and Sassoon and Sassoon and Graves and seems to be a recurring theme throughout the novel. Barker uses Sassoon to present the key issues of homosexuality during the war and how it created a barrier in some peoples lives and was something that men had to hide throughout there life. ...read more.

know the character of Rivers throughout the novel and Barker presents him to be a kind hearted man and very willing to help his patients. This story helps the reader understand the controversial issue of homosexuality and 'Regeneration' helps us understand the issues that was widely absent from literature at the time. The novel also shows how the men felt a connection with each other during the war. Barker explores how Sassoon felt guilt when he thought about 'various people clutching holes in their heads and waving their stumps', in other words his men, this has a large impact on the reader due to the fact that Sassoon only knew these people as his men and not necessarily as friends or family etc, but he still felt an overwhelming guilt for them as he isn't at war and he feels like he should be fighting along side them and feeling their pain. Moreover, this shows that the relationships between men strengthened during war due to the sharing of experiences and understanding towards each other and helps us understand why many men got so attached to each other whilst fighting along side each other and why many men became closer during the war then they ever had done before. ...read more.

"She belonged to the pleasure seeking crowds. He both envied and despised her, and was quite coldly determined to get her. They owed him something. All of them, and she should pay." The malicious tone that Billy uses portrays the loathing soldiers had towards the women who had not been through what they had been through although it was not their fault. When it says "determined to get her" it suggests that Billy is using Sarah for his own gain but it does become clear as the novel progresses that Billy is not using Sarah only for sex but also part of his healing process. Their relationship helps the reader understand the divide between men and women and how the men came together to push many women away, and this suggests the strengthening in relationships between men. In conclusion, Barker presents love through different relationships throughout the novel. The relationships give the reader an understanding of the strengthening in relationships between men throughout the war. I believe that the relationship between Owen and Sassoon is the most powerful relationship to help the reader understand the comradeship and father like ways soldiers had on each other and how the relationships that soldiers had in Craiglockhart were vital as part of the recovery process for each other and how much men's relationships improved during the war. (1,598 words) ...read more.