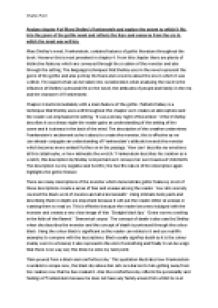 Analyse chapter 4 of Mary Shelleys Frankenstein and explore the extent to which it fits into the genre of the gothic novel and reflects the fears and concerns from the era in which the novel was written.

﻿Charles Ford Analyse chapter 4 of Mary Shelley?s Frankenstein and explore the extent to which it fits into the genre of the gothic novel and reflects the fears and concerns from the era in which the novel was written. Mary Shelley?s novel, Frankenstein, contains features of gothic literature throughout the book. However this is most prevalent in chapter 4. From this chapter there are plenty of distinctive features which are conveyed through the creation of the monster and also through the setting. The language techniques that Shelley uses in the novel represent the genre of the gothic and also portray the fears and concerns about the era in which it was written. The aspects that can be taken into consideration when analysing the novel is the influence of Shelley?s personal life on the novel, the attitudes of people and family in the era and the character of Frankenstein. Chapter 4 starts immediately with a main feature of the gothic. ...read more.

Using the colour black is significant as the reader can relate to it and use real life examples to compare with the descriptions. Black usually signifies death as it is the colour mainly worn to a funeral, it also represents the end of something and finally it can be a sign that there is no way out; this links me onto my next point. ?Rain poured from a black and comfortless sky.? This quotation illustrates how Frankenstein is unable to escape now, the black sky above him acts as a barrier to him getting away from his creation now that he has created it. Also the comfortless sky reflects the personality and feelings of Frankenstein because he does not have any family around him whilst he is at Ingolstadt and has neglected them through his pursuit of creating the monster. The isolation is also a feature of the gothic as it makes it more interesting when someone is alone by building up suspense. ...read more.

We can see the negative effects science can create through the reaction of Frankenstein when he creates his monster. ?Demoniacal corpse which I had so miserably given life.? Birth is meant to be a beautiful welcoming to a new-born; however this description couldn?t be more different. Frankenstein looks upon his creature in disgust which sends a message to the readers not to play with nature. In conclusion, Mary Shelley uses the gothic genre to great effect. However the genres of science and romance may not just be a feature of the book they can also represent the life of Mary Shelley. In context Mary Shelley was a lover of science and ultimately this is what her book is based on however her aim may have been to dissuade people playing or interfering with humanity. The effects are conveyed in the novel. Most of the novel fits in with the gothic genre as Shelley uses: pathetic fallacy, isolation, setting and many more in chapter 4 alone. Overall the novel wavers on the edge of the gothic genre and a deeper personal representation. ...read more.