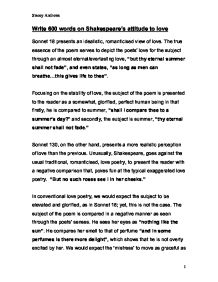 Sonnet 18 presents an idealistic, romanticised view of love. The true essence of the poem serves to depict the poets’ love for the subject through an almost eternal/everlasting love, “but thy eternal summer shall not fade”, and even states, “as long as men can breathe…this gives life to thee”.

Focusing on the stability of love, the subject of the poem is presented to the reader as a somewhat, glorified, perfect human being in that firstly, he is compared to summer, “shall I compare thee to a summer’s day?” and secondly, the subject is summer, “thy eternal summer shall not fade.”

Sonnet 130, on the other hand, presents a more realistic perception of love than the previous. Unusually, Shakespeare, goes against the usual traditional, romanticised, love poetry, to present the reader with a negative comparison that, pokes fun at the typical exaggerated love poetry.  “But no such roses see I in her cheeks.”

In conventional love poetry, we would expect the subject to be elevated and glorified, as in Sonnet 18; yet, this is not the case. The subject of the poem is compared in a negative manner as seen through the poets’ senses. He sees her eyes as “nothing like the sun”. He compares her smell to that of perfume “and in some perfumes is there more delight”, which shows that he is not overly excited by her. We would expect the ‘mistress’ to move as graceful as an angel, however here, Shakespeare suggests that the subject of the poem is ‘heavy footed’, as she “treads on the ground.”  Again, and throughout this sonnet, his ‘mistress’ is viewed in ‘realistic terms’ “I grant I never saw a goddess go”.

The indent, towards the end signifies a change in content, “And yet by heaven, I think my love as rare, As any she belied with false compare”. Here, Shakespeare, states that even though his mistress is all of these unflattering things, he still loves her for who she is. Rather than loving her for her physical appearance, he loves her for the true nature of her character. The first compliment, that we read can be seen nine lines into the sonnet, “I love to hear her speak” however, this is soon contradicted in the following line, when we read, “That music hath a far more pleasing sound.”

Sonnet 34, in comparison, presents us with another aspect of love. It focuses primarily on the emotions of the poet, after an argument with the subject  and explores the poets’ deep and profound pain, “For no man well of such a salve can speak, that heals the wound, and cures not the disgrace”. He is puzzled and disappointed by the youth who, after an argument has disillusioned the poet to feel remorse. “Ah but those tears are …ransom all ill deeds”.

Within the sonnet, Shakespeare uses religious imagery in order to present the moralistic viewpoint of ‘good versus bad’,
“…that thou repent”. Here, Shakespeare feels as though the subject has wronged him in some way and, provides us with further insight into the depths of his pain towards ‘the youth’. The idea of pain, is further explored with references to “salve”, “wound”  and “physic”. Evaporating his pain through his tears, “those tears are pearl which thy love sheds” suggests that at this point, he is able to forgive ‘ the youth’. In the final line of the rhyming couplet, Shakespeare again uses a religious metaphor to suggest that through his tears, he has liberated the youth of blame, “...are rich and ransom all ill deeds”.

Again, sonnet 144, refers to love through the use of religious imagery. We hear of the poets’ involvement in a love triangle between a man and a woman, it is not clear whether this is a tangible or fabricated friendship “… both to each friend”.  This suggests the poets internal conflict, as he ‘hopes’ the male (the good) will conquer the woman (the bad), “Till my bad angel fire my good angel out.” The poets’ lovers are referred to in biblical terms,  in that the female is considered ‘evil’, “my female evil”, whilst Shakespeare refers to the man as  his “better angel” suggesting that the physical love of the feminine is inferior to the spiritual love of the masculine. Again there is a parallel between the bible and Adam and Eve. Woman here, is seen as the temptress of the forbidden fruit, whereas, the male is seen as naive and chaste.

Finally, Sonnet 138 personifies the idea of ‘Greek love’ between men being pure and woman corrupt. This appears to be recurring theme throughout this selection of sonnets, and by doing so, represents the dissonance between the religious and social aspects of life in the 1600’s.

The sonnet centres round lies and deceit and these repeated references serve to question the true morality of woman. He refers to “truth”, “false speaking tongue” and “trust”, suggesting that the subject of the poem cannot be trusted. It suggests that the woman perceives the poet as a naive “untutored youth”, however, from the tone of the poem, the poet knows more than he is letting on. References to “both sides” suggest that he too, is complicit with her in doing so, is young and naïve, “ …say not I that I am old?”. The final rhyming couplet, summarises the tone of the sonnet with a pun, “I lie with her”, suggesting that not only does he ‘lie’ down to sleep with her, but also ‘lies’ with his words too.

All is not how it appears to be within this sonnet and the same can be said for the majority of this selection. The exception to this however, is sonnet 18, where a romanticised, idealistic, eternal view of love is presented. It is not clear, whether this is unrequited love. Religion features heavily in Shakespeare’s’ life and this is made clear through his references and symbolic imagery, throughout the sonnets. Whether these instances highlight Shakespeare’s sexuality, has given rise to debate, and certainly, from what we have seen here, it appears that he indeed did have bisexual tendencies. No where is this more apparent than in Sonnet 144.